Levin to give Noble Lectures 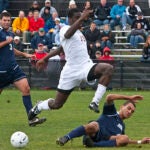 Robert D. Levin, Dwight P. Robinson Jr. Professor of Music in the Department of Music at Harvard, will deliver the annual William Belden Noble Lectures at the Memorial Church on Dec. 1-3 at 8 p.m. Levin will commemorate the 200th anniversary of the composer Joseph Haydn’s death in a lecture series titled “Joseph Haydn as Embodiment of the Enlightenment and Spirituality.” Each lecture will explore a different facet of the composer’s career.

On Dec. 1, in a lecture titled “Gradus ad Parnassum: Haydn’s Incremental Progress to Consummate Mastery,” Levin will discuss Haydn’s modesty and faith and his slow development from an able-bodied musical practitioner of the day to a musician with the consummate mastery that made him the most famous composer of his time.

The next night (Dec. 2) in “Humor, Learnedness, and Universality,” Levin will lecture on the origins and development of Haydn’s style, the growth of his intellectual and structural rigor, and the two great oratorios that crowned Haydn’s career: “The Creation” and “The Seasons.”

The final lecture (Dec. 3) will be “In nomine Domini — Laus Deo: The Luminosity of Haydn’s Faith.” Levin will contemplate the practical and philosophical-theological underpinnings of Haydn’s world, anchored by his Catholicism and, notwithstanding his initiation into the Masonic world, his devotion to J.S. Bach’s declaration: “Music exists for the glory of God and the edification of the spirit.”

A noted theorist and musicologist, Levin is the author of a number of articles and essays on Mozart. His completion of the Mozart C-minor Mass, commissioned by Carnegie Hall, was premiered there in January 2005 and has since been recorded and widely performed.

The William Belden Noble Lectures were established at Harvard University in 1898 and claim an impressive roster of past lecturers including Theodore Roosevelt, H. Richard Niebuhr, Sen. Eugene McCarthy, and Archbishop of Canterbury Robert Runcie.

The Noble Lectures are free and open to the public. For more information, contact the Memorial Church at 617.495.5508 or send an e-mail to memorial_church@harvard.edu.