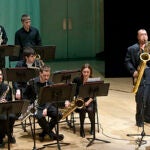 Blowing his own horn

There are a trillion pages on the Internet. In essence, they are the stars and planets and shooting comets of a vast universe of digital knowledge that is expanding every minute.

For 500 years, books have been inviting readers into contained worlds that imply the possibility of mastery. But the Internet invites them into a world of hyperlinks. They explode the notion of containment and make mastery of all but the narrowest inquiries impossible.

This expansive, open age of digital information challenges the traditions of scholarship, learning, and even the act of reading. So what will be the fate of higher education in the digital age?

That was the subject of a Harvard panel on Wednesday (Nov. 18), “No More Teachers? No More Books?” It is the first of four such sponsored panels this academic year by the Harvard Extension School, which celebrates its 100th year in February.

The Extension School itself is a case study in how the Internet is transforming higher education. This year one-third of Extension enrollees, in more than 120 countries, are taking online courses.

Lewis is co-author of “Blown to Bits: Your Life, Liberty, and Happiness After the Digital Explosion” (2008). Shaken by the digital age, people have reached “some kind of cusped time,” he said, in which they are coping with ubiquitous information and new social forces that have grown up around the Internet.

People are not at the cusp yet because “we’re still using books,” said Weinberger, a media philosopher. He described books as a “disconnected medium,” the kind of containment no longer honored in an age of hyperlinks. Authors no longer decide where a topic stops. Readers do, as they click freely through layers of links.

Books also imply a world of knowledge in which experts filter and choose, said Weinberger, author of “Everything Is Miscellaneous: The Power of the New Digital Disorder” (2007). But the Internet means embracing a “new strategy” for learning, he said, with a philosophy of “Include everything; filter on the way out.”

Books also imply that knowledge is mastered, said Weinberger, but the Internet is a loose-edged world.

Weinberger showed his training as a philosopher in discussing a revolutionary truth about learning on the Internet. Its layers and links show us “there’s always been an argument about what’s been said.” That is, the Internet is a continual challenge to authority.

As for higher education, universities will remain places — physical entities — in the digital age, said Weinberger. Their material reality will not be “leached away” by the Internet. The learning process will benefit from the knowledge-sharing ethos of the Internet and by its tendency to “fill every interstice” of inquiry, he said, which is  “pretty good news for higher education.”

But wait a minute, countered Darnton, a historian as well as library leader. The book is not dead.

“The old-fashioned print codex is doing very well, thank you,” turning out something like a million new titles a year worldwide, he said. Darnton is the author of “The Case for Books: Past, Present, and Future” (2009) and is a cautionary critic on leaping too fast into the digital age.

The digital age brings with it “a period of enormous confusion … a new world in which we need guidance,” said Darnton. That’s good news for the idea of “teachers and books,” he said, the “two implements” of traditional learning that must be embraced with new attention.

Meanwhile, there is reason to worry about print-digitization projects such as Google Books. Technicians scanning texts may use wrong editions, miss pages or volumes, or employ arbitrary categories for the finished, digitized books. Walt Whitman’s “Leaves of Grass,” Darnton said, “comes up under gardening.”

A bigger worry, he said, is that so much information winds up in the hands of a “corporate monopoly.” Despite glitches, the Google project is “so good” that it should not be in private hands, said Darnton. “It should be harnessed for the public good.”

Sitting next to Darnton was Silverstein, who was Google’s first employee, and who right away said he was “trained by lawyers” not to say anything about Google Books.

But he offered insights into the role of universities in the digital age. Higher education does a good job of imparting technical knowledge, but only in a work environment do people pick up “ancillary skills related to a group environment,” said Silverstein. “You can do well (in school) without learning these other skills.”

Software engineering, for instance, is more than computer science, he said. It involves “testing and programming in a group environment,” and using the social skills that make the transfer of knowledge easier.

Silverstein used the example of a graduate student who wrote software code that worked well but was written in such a way that no one else could understand it. Survival in the workplace requires not just technical skills, but “awareness of the environment you are in.”

Google is aware that the world of the classroom should be supplemented by the workplace, he said, citing the company’s “Summer of Code.” Since 2005, Google has sponsored about 1,500 student software developers. They are given three-month stipends to write code for open-source projects, under the guidance of mentors.

“I’m excited to see where that takes us,” said Silverstein.

In the classroom, the digital age is changing the way that people think, read, and learn in a university environment, said panelist Turkle.

Meanwhile, the digital boom has also created its own myths, she said, including the “myth of multitasking.” Despite our embrace of “volume and velocity,” said Turkle, “when you multitask, you do everything worse.” Ironically, the digital age has brought with it a new imperative to slow down and take some time.

Another myth is that simulation is the best way to learn, Turkle said, but “simulation reality will always leave something out,” including a sense of scale and the necessity to doubt (and not just love) technology.

Sitting in front of computers, wowed by what they see, people “learn to take things at interface value,” often at the expense of focusing on the real. Turkle said that what gets lost is a skill long associated with higher education: critical thinking.

In the world of digital information, she said, “We must approach our tools with the appropriate doubt.”