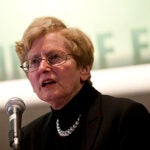 In 1859, the first commercial oil well was drilled near Titusville, Pa. The modern oil industry that followed quickly changed landscapes around the world.

By the 20th century, a burgeoning world of derricks, tanks, pipelines, and refineries required more roads, railways, and ship lines for distribution. Cities changed with the arrival of big oil, becoming denser and busier. With the advent of cheap cars, highways widened, clover-leafed, and spread into far suburbs.

Despite all of this change, architectural historians have not often studied the effect of oil infrastructure on landscapes. Nor have they much studied the social implications of the spaces changed by the oil energy business, from abandoned oil fields to busted boomtowns — or even the destination of oil money.

Most of it goes global as profits or sometimes philanthropy, ignoring localities and their blighted extractive landscapes, the holes in the ground that yield four-fifths of the world’s energy.

Enter New Geographies 02, “Landscapes of Energy,” a booklike journal of 17 essays distributed by Harvard University Press. It addresses the fact that energy takes up space, and that in turn such space deserves scholarly inquiry.

Contributors to the journal include the late Ivan Illich, a philosopher and critic of the technological world. His essay “The Social Construction of Energy” is published here for the first time. (“Energy” as an economic measure is a modern construct, he argues, and has suppressed social freedoms.)

Other essays look at oil violence in Amazonia, pipelines and social justice, an energy history of Houston, the ambiguities of hydropower, humanity’s “enslavement” to energy, and architecture-certification programs that sidestep the fact that “architecture and urbanism (are) responsible for 75 percent of energy consumption.” (In that same essay, “(Against) the Greenwashing of Architecture,” Canadian architect Mirko Zardini concludes, “We can arrive to the point of questioning the necessity to build.”)

“Landscapes of Energy” is the third in a “New Geographies” series launched in 2008 at the Harvard University Graduate School of Design (GSD). The journals, intended to bring geographical scale to modern urban design, appear every six months. (The next, out in the spring, will examine the “urbanisms of color,” how colors give meaning to cities.)

The journals are conceived and edited by doctor of design students at the GSD, under the direction of A. Hashim Sarkis, a professor in the Department of Urban Planning and Design.

Energy landscapes could become a new “subcategory” of inquiry for designers and architects, said Sarkis, by introducing “new conditions of visibility” for the energy systems that support cities.

He moderated a Nov. 20 journal-launch panel at the GSD’s Piper Auditorium, a mixed-discipline collection of designers and scholars who vetted “Landscapes of Energy” ahead of time. (Sarkis, a practicing architect in both Cambridge and Lebanon, is also the Aga Khan Professor of Landscape Architecture and Urbanism in Muslim Societies.)

The other panelists were architect Martin Felsen, co-founder of the Chicago firm UrbanLab; Mark Jarzombek, associate dean of the School of Architecture and Planning at the Massachusetts Institute of Technology; lawyer and linguist Sheila Jasanoff, professor of science and public policy at the Harvard Kennedy School; and student of geographic space Ajantha Subramanian, a Harvard associate professor of anthropology and social studies.

Systems involving oil-based energy exist on a large geographic scale, “yet they remain invisible” to scholars and often to energy consumers, said journal editor-in-chief Rania Ghosn, a GSD doctor of design candidate who introduced the panel. Making this unacknowledged infrastructure an object of study, she said, makes possible “appropriate scales of intervention.”

A post-colonial scholar who teaches a course on the “politics of nature,” Subramanian is studying workers at lead and cadmium mines in Oklahoma, people whom she said feel both intimate with the business of extraction and repulsed by it.

In the oil business, there is a similar social unevenness, she said, pointing to the new journal’s essay by Gavin Bridge, “The Hole World: Scales and Spaces of Extraction,” which looks at “the oil hole” and the “disenfranchised habitations” around it.

Landscapes of extraction are expressions of capitalism, wrote Bridge, but they are also “strategic sites for challenging the social relations of capitalism,” frictional borders where the status quo is questioned.

That status quo shifts too. Just after World War II, the Western world was “celebrating landscapes of oil,” the smokestack industries, bustling highways, and blooming suburbs that were the outward signs of progress, said Ghosn. These landscapes no longer have a “romantic resonance,” she said, but the landscapes of renewable power do.

He took aim at one of the journal essays, “Conduit Urbanism,” which imagines a future “post-carbon highway” in which old spaces — off-ramp interchanges, for instance — are converted to use in a “renewable-energy conduit.” Colorful illustrations show neat highways lined with magnetic-levitation rail lines and spinning wind turbines.

This “piles on the clichés,” said Jarzombek, the idea of “a happy machine in the garden” that turns energy realities into a kind of Potemkin village.

“All urbanism today is Potemkin,” he said, referring to the false villages lined up in the Crimea during the 18th century to impress the visiting Empress Catherine II. “Green landscaping,” he went on, in the panel’s sharpest digression, “is Potemkin ecology.”

In the face of these well-meaning attempts to obscure “the reality of this messed-up world,” said Jarzombek, why not do what most of the journal suggests: Show the realities of how the energy machine and the building machine work. “Invisibilities need to be exposed,” he said.

That exposure is what Sarkis called “elevating to visibility the performative function of architecture,” and then “celebrating it.”

“Restoring visibility is not just trivial,” said Jasanoff, and should not stop with architects and urban designers. A “parallel piece of work” could come out of government and law schools, she said, in a study of the legal structures and institutions that make energy landscapes possible, and that in turn make related injustices possible.

Design is a “tool for policy,” and “the rules and those who set them are increasingly important,” said Felsen. So society needs national urban priorities that meld technology and policy.

One example, he said, is the issue of fuel-efficiency standards, which relates to auto design and engine technology. Why look at these standards in isolation? They need to be paired with a policy that, say, doubles public transit ridership.

The new journal and its neglected topic “tries to get to the heart of some of the big social equity problems” rising out of the oil energy landscape, said Felsen — and that’s good. But the idea of relying instead on a world of alternative energy is problematic, he added. For one thing, less than 1 percent of the world’s energy comes from renewable sources, while the use of coal continues to increase.

So instead of fighting existing energy systems, he said, why not institutionalize the best practices within them?

Subramanian agreed, to a point. “Best practices are always partial experiments, with hidden underbellies which will arise after the fact,” she said. “That should keep us vigilant.”