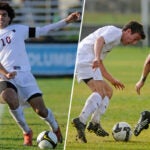 After last week’s contest, where a Harvard win would have clinched at least a share of the Ivy League Championship, the Crimson now stand in second place. They need to defeat Yale and hope that Cornell (2-7; 1-5 Ivy League) upsets Penn (7-2; 6-0 Ivy League) to clinch a share of their third-straight conference title and 14th overall.

Harvard has won seven of the past eight games against the Bulldogs, and holds a 52-65-8 record in the historic series. In Harvard’s back-to-back championship years, both titles were clinched with victories over the Bulldogs.

Saturday’s contest at the Yale Bowl begins at noon and will be nationally televised on Versus TV, with radio broadcasts on 1120 AM (Boston), 1390 AM (Plymouth), 970 AM (Sturbridge), the Harvard student radio station, WHRB-FM 95.3, and Sirius Satellite Radio.