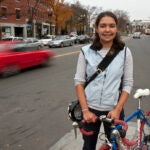 On the road and out of control

At HAA event, Faust urges freshmen to embrace the possibilities

President Drew Faust urged incoming students to shed their freshman shyness and embrace the possibilities at a large research institution such as Harvard, a place that she says helps its students stretch their potential in seeking their life’s calling.

“Harvard lifts aspirations. It makes people want to do more, to reach and stretch,” Faust said.

She made her comments in response to a question from former New York Times reporter Linda Greenhouse, now a member of Harvard’s Board of Overseers, who moderated a talk with Faust before an audience of Harvard alumni Nov. 9 at Paine Hall

Faust and Greenhouse appeared with Harvard Law School Professor Lawrence Lessig at a two-part President’s Forum, sponsored by the Harvard Alumni Association and the Harvard Club of Boston. Lessig, who is director of the Edmond J. Safra Foundation Center for Ethics at Harvard, opened the event, delivering a dynamic talk about institutional ethics and how legal lobbying is exerting a corrupting influence on the nation’s decision makers.

Lessig spoke broadly about institutional ethics, citing the Exxon Valdez oil spill and the influence of congressional lobbying as examples of how important acting ethically is in society. On the congressional issue, Lessig said that even when conducted legally, lobbying creates a mini-economy that buys powerful interests access to members of the House and Senate that is denied to ordinary citizens. Further, he said, the high cost of running political campaigns makes senators and representatives dependent on special-interest money, creating an unhealthy triangle where lobbyists finance politicians’ campaigns, politicians give access to special interests, and special interests, in turn, hire lobbyists.

On the Exxon Valdez case, Lessig said the ethical question is whether the ship’s captain should have been allowed to steer a supertanker when his automobile driver’s license had been suspended for drunk driving, and whether the people around him should have taken action once they knew he might have been impaired. In discussing who is responsible in such cases, Lessig pointed a finger back at the audience — and beyond.

“It’s not the evil people we need to focus on, it’s the good people, the decent people,” Lessig said. “Corruptions are primed by the most privileged and permitted by the passivity of the most privileged. … I think the branch of government we need [to act] is the people.”

In her part of the program, Faust fielded a range of questions, both from Greenhouse and the audience, touching on building community, the financial crisis, and on Harvard’s effect on its students. Responding to questions about Harvard’s financial situation, Faust said that, though the endowment’s losses set its balance sheets back to where they were in 2005, “we were a pretty good university in 2005.” But Harvard has taken on commitments since then that are not easily shed, Faust said, leading to necessary moves in the last year, such as layoffs, wage freezes, and cuts to expense and travel spending, among others.

Faust said she did not believe there would be a rapid bounce-back of the endowment with a return to business as it was. Rather, she said, Harvard is at a “new normal,” complete not only with financial constraints but with opportunities to rethink how the University does business.

Faust defended both the endowment’s investment strategy and the manner in which it compensates Harvard Management Company (HMC) money managers. She said the endowment’s investment strategy has led to an average 8.9 percent annual return over the last decade, even with last year’s crash, far ahead of the 1.4 percent annual return that a more conservative 60/40 split between stocks and bonds would have delivered. As for the managers, Faust said the compensation plan was designed to both attract the necessary talent to HMC and link compensation to performance, giving bonuses and other features that reward performance above benchmarks and taking back bonuses when managers underperform.

The rapid decline in the endowment has highlighted how dependent the University has become on that income, Faust said. One necessary change in how Harvard conducts its financial affairs will be to recognize that endowment dependence and to plan for future volatility. That means that buffers against future declines, in the form of reserves, need to be built up and maintained by the Schools most dependent on endowment income, she said.

Despite Harvard’s financial challenges, Faust added, the University’s commitment remains strong to student financial aid, which has been spared the cuts suffered by other programs. That is because the University intends to remain true to its commitment to attracting the best and the brightest, regardless of economic background, she explained.

“We think this is our responsibility as an institution,” Faust said.