Giving the gift of time 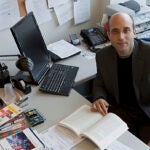 On a recent Friday, a group of University officials from central administration traded in their blazers and neckties for T-shirts and blue jeans, and spent the morning volunteering at the Greater Boston Food Bank.

Twenty-eight staffers climbed onto a bus and traveled to Boston’s South End on Nov. 6 to spend the morning sorting more than 9,000 pounds of food, such as cans of tuna, jars of peanut butter, and other nonperishable items for distribution to the 600 food pantries that the food bank supports. Harvard’s first group of volunteers also donated 166 pounds of nonperishable goods, raised through an in-house food drive.

This year the food bank has seen a sharp rise in demand as more families are struggling to cope with the ongoing recession.

The visit kicked off Harvard’s yearlong volunteer effort, which involves groups of students, faculty, and staff assisting at the food bank on Friday mornings through the end of the academic year.

President Drew Faust announced the ongoing commitment to the food bank, the first of its kind for the University, last month during a University-wide celebration of public service. University groups that would like to join the volunteer effort can e-mail community@harvard.edu to sign up.

The Community Gifts Through Harvard campaign, which launches this month, is another way for the University to make a difference in its host communities. Each year, for more than half a century, the Harvard community has rallied to help. Last year’s contributions aided more than 400 human service agencies and charities in Greater Boston.

The campaign helps to fund food distribution programs for the hungry and the homeless; home health care for the elderly; programs to prevent drug and alcohol abuse; programs to fight racism and discrimination; cancer research, education, and patient services; and programs to break the cycle of substance abuse and crime.