Crimson edged in NCAA first round 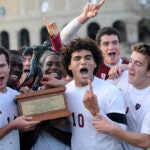 In a fight to the finish, the Harvard women’s soccer team fell to Boston College (B.C.) in the opening round of the NCAA tournament, 1-0.

Harvard and B.C. finished the first half scoreless, but 33 seconds into the second, B.C. broke the tie with a goal.

In such a low-scoring battle, the story of the game was defense. The Eagles only allowed one Crimson shot the entire game, whereas Harvard, which surrendered 20 shots, was led by goalkeeper Lauren Mann ’10, a Second Team Ivy League selection, who recorded 10 saves on the day.