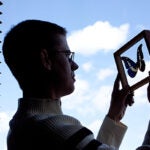 Caught in the act

The disease is indiscriminate. It can invade the life of a princess or a Nobel laureate with equal ease.

For the winner of the Nobel Prize in economics, the bad news came at age 18. Oral cancer was the diagnosis for Amartya Sen, Harvard’s Thomas W. Lamont University Professor, and that was followed by heavy doses of radiation, along with serious surgery.

Cancer struck the 2-year-old son of Princess Dina Mired of Jordan, in the form of leukemia.

As president of Harvard University, Drew Faust wears many hats — administrator, scholar, historian, author, and fundraiser. But she is also a survivor. In 1988, at age 40, Faust was diagnosed with breast cancer after her first routine mammogram.

For each of them, access to sophisticated medical interventions and therapies meant the difference between life and death.

Breast cancer, once considered largely an illness of the Western world, is a rising scourge in developing nations as more women there are diagnosed with it. Analysts attribute the increase to lifestyle practices imported from the West, such as delayed childbearing, weight gains, alcohol consumption, and reduced activity. And as the disease spreads through developing nations, access to treatment and care can’t keep pace.

“In low-income and underdeveloped regions, approximately 56 percent of the women diagnosed with breast cancer will die of their disease, while in the developed world that number is 24 percent,” Dean Jeffrey Flier of the Harvard Medical School told a crowd on Nov. 4 at a three-day conference (Nov. 3-5) on “Breast Cancer in the Developing World: Meeting the Unforeseen Challenge to Women, Health and Equity.”

“That kind of difference,” said Flier, who is also the Caroline Shields Walker Professor of Medicine, “is unacceptable.”

Flier’s remarks, along with those of Sen and Mired, were part of the international conference that was convened, organizers said, to develop “an action and research agenda to meet the challenge of breast cancer in developing countries, with a focus on promoting the rights and health of women and strengthening health systems.” Specialists from many nations are discussing early detection and treatment in developing countries, the use of mammography, and the creation of inclusive research agendas.

We are here to “work on solutions,” said panelist Lawrence Shulman, chief medical officer and senior vice president for medical affairs at Dana-Farber.

“In 2007, an estimated 1.3 million women were diagnosed with the disease, the majority in the developing world.”

In the developing world, many factors complicate delivering care to breast cancer patients, including the remaining stigma around the disease, and the fact that a woman’s access to treatment often is controlled by a man. In addition, because such regions are economically poor, care is often inadequate, drugs costly, and access limited to technology, such as mammography, that can detect breast cancer in its early stages, when it is most treatable.

“Cancer is not an ailment of just the individual — its impact is as social as it is personal,” said the Harvard professor, who called for a focus on the “social correlates” to the medical dimensions of the disease. For instance, patients in low-income countries, in addition to lacking conventional care, are unable to withdraw from the daily duties of work and child care to concentrate on treatment and healing.

That lesson of the haves and the have-nots made an impact on Faust. “I quickly became aware that I was lucky in a number of ways,” she told the symposium’s opening session, recalling that her well-insured status and her access to strong medical facilities meant she received “outstanding” treatment and care.

But another critical factor played a role in her recovery, she said, a fundamental shift here in the way the disease was perceived by others.

“In my mother’s generation, it was never openly discussed. It was whispered about, it was hidden,” she said. At a time when a woman most needed family and friends, she often found herself most distanced from them

“But by 1988 this had begun to change significantly in the United States, and I was the direct and grateful beneficiary of these transformations,” said Faust, who chose not to hide her disease and instead sought “solidarity” from other women diagnosed with breast cancer who were ready and willing to share their experiences.

Faust said her own story suggested that while improved breast cancer treatment in the developing world will mean better access to health care, drugs, and procedures for diagnosis and cure, it “will also involve the kinds of transformations in attitude that I have witnessed in the United States in my own lifetime — attitudes that will enable women to confront their illness, to seek treatment, and to enjoy the full support of family, friends, and community as they combat the disease.”

Sen said that continuing gender inequality in the developing world means there is “a far less acute awareness of the ailments of women compared to those of men.” Sen admitted he was struck by the results of his own early research on the topic 25 years ago involving hospital admissions data in Mumbai, formerly called Bombay.

The evidence showed that women admitted for care were much sicker than their male counterparts, suggesting, he said, that in developing countries the “woman had to be much more stricken before she is actually taken to the hospital.
Sen’s own experience with cancer underscored the social factor connected to cancer awareness and treatment in the developing world. As a young university student with oral cancer, he recalled how his professors in India made excuses for his absence in class.

The social stigma associated with having cancer created a type of “culture of concealment” in the developing word, said Sen, one that dramatically affects women suffering with cancer. “This adds yet another complication to the battle against cancer in the poorer countries,” he said.

“Society can indeed be a big player in medical battles,” he said, adding that the social and medical approaches to the disease “have to be integrated.”