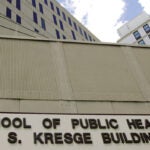 Around the Schools: Harvard School of Public Health

Edward O. Wilson, the Pellegrino University Professor Emeritus at Harvard, has been named Commander, First Class of the Royal Order of the Polar Star, by King Carl XVI Gustaf of Sweden for his contributions to biodiversity research and assistance to the Swedish government during the Linnaeus centennial year.

The emblems of the award, the same given to Carl Linnaeus in the mid-1700s, were presented to Wilson by the Ambassador of Sweden Jonas Hafström on Sept. 4 in Washington, D.C.