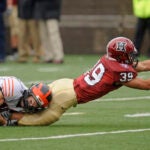 The Crimson, who own a 4-4 record at home this season, are 4-2 in the past six games and have already tied last season’s win total, when they went 8-18.

A strong performance during this home stand will be critical for Harvard, which currently is in fourth place, and will likely rely on the play of middle blockers Sandra Fryhofer ’12 and Anne Carrol Ingersoll ’12, as well as outside hitter Mikaelle Comrie ’11.