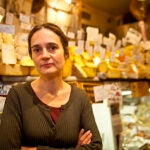 Harvard students who have spent the semester digging through the dark earth of Harvard Yard showed off their treasures today (Oct. 29), including a slate pencil that confirms that, amid the eating, drinking, and smoking that their counterparts from yesteryear did, learning was going on too.

The pencil, a slim 2-inch gray piece of what may be compressed clay, was used to write on a personal slate that students held as they worked. That pencil and slate may have been used as a scratch pad to figure or compose on before committing pen to paper, according to Lecturer on Anthropology Christina Hodge, a class instructor.

Daniel Balmori, the Winthrop House junior who dug out the pointed end of the slate pencil last weekend, had another good day today, uncovering the pencil’s second half while surrounded by onlookers who had gathered for the class’ traditional Results Day, when students share what they’ve found with passersby and visitors. Attending today’s event were Harvard President Drew Faust, Shelly Lowe, executive director of the Harvard University Native American Program, and Charles Sullivan, executive director of the Cambridge Historical Commission.

Hodge said the 27 students in the class, “The Archaeology of Harvard Yard,” dug up thousands of small artifacts dating from the 1600s to the present. Included were bits of brick and iron nails, a coin, many pieces of pottery of different sizes and colors, glass, pipe stems, and oyster shells.

Among the more interesting pieces on display today were the slate pencil, a piece of print type — the letter “o” — that may have come from North America’s first printing press, and an intact musket ball that appeared never to have been fired.

Hope Mayo, the Philip Hofer Curator of Printing and Graphic Arts at the Houghton Library, said she’ll conduct further investigation on the print type to see if she can match it to a book in Houghton’s collection. The type joins 18 to 20 other pieces found during similar digs over the years.

As for the musket ball, William Fash, Bowditch Professor of Central American and Mexican Archaeology and Ethnology, Howells Director of the Peabody Museum of Archaeology and Ethnology, and one of the class’ instructors, said it’s difficult to tell the story of that particular musket ball. In the past, he said, they’ve found fragments and deformed balls that have been shot, but never a pristine one.

Fash said that when the digging ends over the next few weeks, students will spend time in the lab, cleaning and cataloging their finds. Next semester, they will continue to analyze their results and write reports on their activities.

The site, cordoned off from the rest of the Yard by an orange plastic construction fence, is located in front of Matthews Hall and is marked by large, square excavation holes, some 4 or 5 feet deep, and piles of sifted dirt removed from them. The students are digging near the site of two of Harvard’s first buildings, a wooden structure known as the Old College, which stood from 1638 to 1679, and a brick building known as the Indian College, which stood from 1655 to 1698.

This year’s digging began during the Harvard Summer School version of the course. When that class ended, instructors simply covered the linked square holes instead of filling them in, allowing the fall class to dig deeper in subsequent weeks. Some of the holes extend through several feet of dark earth to a layer of light brown dirt that marks the level before the area was inhabited.

Katie Ericksen, a junior history of science concentrator, said that after having done a lot of document-based historical research, it was great to get out and unearth some history on her own.

“I’ve loved it so far,” Ericksen said. “It’s really cool to dig in the Yard and see oyster shells and know that this is what they were eating.”

When Faust, a historian herself, stopped by, she chatted with instructors and students, viewed their finds, and even sifted a bucket of fresh dirt from one of the plots.

Faust said the students are engaged in a treasure hunt where the prizes are bits of the history of Harvard, the region, and New England. The active dig site amid bustling Harvard Yard is a reminder of both the University’s long tradition here and of the learning and search for knowledge that goes on today, she said.

“This reminds us of the process of discovery at Harvard, on which we have a window right here,” Faust said. “It reminds us of Harvard traditions of which we’re a part, that began here so long ago, and which continue today.”