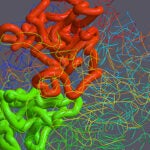 Scientists have deciphered the three-dimensional structure of the
human genome, paving the way for new insights into genomic function and
expanding our understanding of how cellular DNA folds at scales that
dwarf the double helix.

In a paper featured this week on the cover of the journal Science,
they describe a new technology called Hi-C and apply it to answer the
thorny question of how each of our cells stows some 3 billion base
pairs of DNA while maintaining access to functionally crucial segments.
The paper comes from a team led by scientists at Harvard, the Broad Institute of Harvard and MIT, the University of Massachusetts Medical School, and the Massachusetts Institute of Technology (MIT).

“We’ve long known that on a small scale, DNA is a double helix,”
says co-first author Erez Lieberman-Aiden, a graduate student in the
Harvard-MIT Division of Health Sciences and Technology, a researcher at
Harvard’s School of Engineering and Applied Sciences, and a member of the laboratory of Eric Lander at the Broad Institute. “But if the double helix
didn’t fold further, the genome in each cell would be two meters long.
Scientists have not really understood how the double helix folds to fit
into the nucleus of a human cell, which is only about a hundredth of a
millimeter in diameter. This new approach enabled us to probe exactly
that question.”

The researchers report two striking findings. First, the human
genome is organized into two separate compartments, keeping active
genes separate and accessible while sequestering unused DNA in a denser
storage compartment. Chromosomes snake in and out of the two
compartments repeatedly as their DNA alternates between active,
gene-rich and inactive, gene-poor stretches.

“Cells cleverly separate the most active genes into their own
special neighborhood, to make it easier for proteins and other
regulators to reach them,” says Job Dekker, associate professor of
biochemistry and molecular pharmacology at UMass Medical School and a
senior author of the Science paper.

Second, at a finer scale, the genome adopts an unusual organization
known in mathematics as a “fractal.” The specific architecture the
scientists found, called a “fractal globule,” enables the cell to pack
DNA incredibly tightly — the information density in the nucleus is
trillions of times higher than on a computer chip — while avoiding the
knots and tangles that might interfere with the cell’s ability to read
its own genome. Moreover, the DNA can easily unfold and refold during
gene activation, gene repression, and cell replication.

“Nature’s devised a stunningly elegant solution to storing
information — a super-dense, knot-free structure,” says senior author Eric Lander,
director of the Broad Institute, who is also professor of biology at
MIT and professor of systems biology at Harvard Medical School.

In the past, many scientists had thought that DNA was compressed
into a different architecture called an “equilibrium globule,” a
configuration that is problematic because it can become densely
knotted. The fractal globule architecture, while proposed as a
theoretical possibility more than 20 years ago, has never previously
been observed.

Key to the current work was the development of the new Hi-C
technique, which permits genomewide analysis of the proximity of
individual genes. The scientists first used formaldehyde to link
together DNA strands that are nearby in the cell’s nucleus. They then
determined the identity of the neighboring segments by shredding the
DNA into many tiny pieces, attaching the linked DNA into small loops,
and performing massively parallel DNA sequencing.

“By breaking the genome into millions of pieces, we created a
spatial map showing how close different parts are to one another,” says
co-first author Nynke van Berkum, a postdoctoral researcher at UMass
Medical School in Dekker’s laboratory. “We made a fantastic
three-dimensional jigsaw puzzle and then, with a computer, solved the
puzzle.”