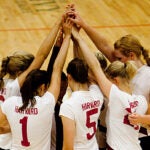 Program gives first-year students, parents a sense of what’s ahead

Parents know that as first-year students their children will have to deal with new issues involving roommates, course choices, and time management, while being away from home for the first time. It is an exciting period that ushers in adjustments as well as opportunities for students and families alike.

Harvard College offered a window into these transitions on Oct. 23 and 24, when parents of first-year students visited campus for Freshman Parents Weekend. The two-day program provided context for a world that parents otherwise might learn about only by telephone and e-mail.

Kevin Kerr ’79 and Kathleen (Murphy) Kerr ’80 attended the weekend events — their daughter Margaret is a member of the Class of 2013 — while simultaneously celebrating Kevin Kerr’s 30th class reunion. Even for these two alums, the weekend offered fresh insights into the Harvard campus and community.

“Today, I am getting more of an idea of what the College is all about in a broader context,” said Kathleen Kerr.

“This is another shared experience with our daughter. It’s great to be back here, 30 years apart,” said Kevin Kerr.

Freshman Parents Weekend, organized by the Office of Student Life in collaboration with the Freshman Dean’s Office, offered a program that included faculty lectures, guided tours of historical buildings, and panel discussions about academic and student-life issues. The Crimson Key Society, a student organization that leads campus tours throughout the year and provides leadership for many campuswide activities, greeted parents and showed them around.

“The whole schedule has been designed to give parents an experience of what it’s like to be a student here at Harvard and to experience the community of Harvard,” said David Friedrich, assistant dean of Harvard College for student life, who led the weekend planning. “We want parents to feel connected to what their students are experiencing and have some context for when they talk to their students.”

Friday afternoon, Harvard President Drew Faust and Harvard College Dean Evelynn Hammonds welcomed parents during a program at Sanders Theatre. They opened the session by talking with upper-class students Jenny Lee ’10 and Anthony Britt ’10. The discussion covered topics that included the Program in General Education, the diversity of the new class, the impact of the financial crisis on Harvard, as well as community life on campus.

The conversation was followed by a rousing performance of school fight songs by the Harvard University Band.

By gently turning some common but difficult situations on their ear, the skits provided a platform to discuss issues that can be tough to address. In one skit, a student timidly explained to his mother that he wanted to pursue his dream of becoming a doctor — despite his family’s expectations that he would become a poet.

After each skit, a panel commented on the themes and offered advice for given situations. The panel included Will Cooper, resident dean of freshmen, Soheyla Gharib, chief of medicine at Harvard University Health Services, Robin Mount from the Office of Career Services, and Craig Rodgers from the Bureau of Study Counsel.

Also on Friday, Jorge Dominguez, Antonio Madero Professor of Mexican and Latin American Politics and Economics, opened up his class, “The Cuban Revolution, 1956-1971: A Self-Debate,” to parents. Daniel Lieberman, professor of human evolutionary biology, and Mahzarin Banaji, the Richard Clarke Cabot Professor of Social Ethics, gave special presentations for parents on the evolution of running and the psychology of bias, respectively.

Freshman Parents Weekend coincided with the football Homecoming Game against Princeton on Saturday. Parents were invited to a luncheon, where they were able to meet their child’s proctor and resident dean as well as other parents and students. They also received free tickets to the game.

Kristen and Michael McCarthy traveled from Oak Grove, Calif., to attend the parents’ session and watch their son, Matthew McCarthy ’13, play in the football game.

“We are here to get a better understanding of the opportunities, and it’s a great time to see the campus and get to know the people, as well as meet other parents. We enjoy the history here,” said Michael McCarthy. “We are also looking forward to seeing our son in uniform tomorrow, playing in the football game.”

On Saturday, Harvard’s fans, including the McCarthys, weren’t disappointed, as the Crimson prevailed over the Tigers, 37-3.