Service of Thanksgiving for Drew Faust 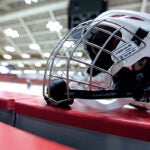 Crimson look to helmets in fight against concussions

As the clouds cleared, the rain ceased and the sun began to break through, a new day in Harvard history dawned as the University’s first woman president, Drew Faust, was honored at a Service of Thanksgiving at the Memorial Church in Harvard Yard.

Friends and family, University officials and employees, and several members of the Corporation as well as past president Neil L. Rudenstine were all on hand to mark the occasion in a ceremony that was filled with beautiful music as well as readings and addresses that were both solemn and at times, slightly silly.

Faust entered the church through a small side door at the front of the hall on the arm of the Rev. Professor Peter J. Gomes, Plummer Professor of Christian Morals and Pusey Minister in the Memorial Church, and accompanied by Bernard Steinberg, president of Harvard Chaplains and president of Harvard Hillel, and the Rt. Rev. G.P. Mellick Belshaw, retired Episcopal bishop of New Jersey and Faust’s cousin. The Cambridge Symphonic Brass Ensemble played “Festive” from “Inaugural Marches” by Daniel Pinkham ’44.

“We have come to pray for the happy and useful administration of our 28th president Drew Gilpin Faust, we are mindful of her gifts and we pray that they may be both sustained and increased in our behalf,” said Gomes as he opened the service.

Faust’s family figured prominently in the ceremony. For the first reading, her brother Lawrence Gilpin, his two daughters, Lili and Tyson, and Faust’s daughter Jessica Rosenberg ’04 read a selection from none other than Dr. Seuss’ “Oh, the Places You’ll Go!” which was chosen by Faust herself.

The text drew lots of laughs as it got across its message to persevere in times of adversity.

In the final reading of the service, Faust’s stepdaughter, Leah Rosenberg, read from an excerpt from Abraham Lincoln’s address before the Wisconsin State Agricultural Society in 1859.

“Let us hope … we shall secure an individual, social, and political prosperity and happiness whose course shall be onward and upward and which while the Earth endures shall not pass away.”

As the service concluded, almost as if on cue, the sun broke from the clouds and streamed through the side windows of the church facing Widener Library.

Those in attendance were aware of the historic importance of the day.

“This will be wonderful for the University,” said Gail Gilmore, assistant director for public and community service, general counseling, and career in the arts at Harvard College’s Office of Career Services.

“I’ve always thought that Drew was a remarkable person and I am speechless at this point,” said Belshaw after the service as the extended family gathered for a photo on the church steps. “I just think it’s a wonderful choice on the part of Harvard and I am so proud of her.”