Running away with another victory 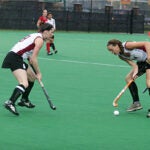 Field hockey takes down Brown for fourth win of season

In his first start of the season, Harvard running back Cheng Ho ’10 ran for 132 yards on 21 carries and two touchdowns in the Crimson’s 28-14 victory over the Lehigh Mountain Hawks on Oct. 3. The victory moved Harvard to 2-1 on the year and was the program’s 800th all-time (ninth all-time in Division I) victory.

The Crimson, after giving up the game’s first points on a 1-yard touchdown reception on the game’s opening drive, responded with four unanswered touchdowns on their way to their third-consecutive win against Lehigh.

Harvard’s rushing attack, led by Ho, gained 181 yards on the ground while quarterback Collier Winters ’11 went 15 for 34 for 152 yards with two touchdowns and an interception.

On defense, the Crimson recorded five turnovers (four interceptions, one fumble recovery) and five sacks on the day. Junior defensive back Collin Zych led the way with six tackles and two interceptions, while senior linebacker Jon Takamura had seven tackles, two sacks, and a late, fourth-quarter interception, which was returned 60 yards for a touchdown to give Harvard a 28-7 lead. From there, the Crimson never looked back, ensuring their second win of the season.

This Saturday (Oct. 10) the Crimson will travel to Ithaca, N.Y., for a critical Ivy League contest against the Cornell Big Red (2-1; 1-0 Ivy league). The winner will advance to a 2-0 record in the league.