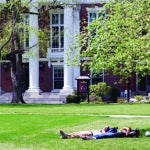 Dean emeritus Paul Goldhaber, who was appointed dean at the Harvard School of Dental Medicine (HSDM) by then Harvard President Nathan Pusey in 1968 and served as Dean for 22 years, died July 14, 2008, at the age of 84. He is survived by his wife Ethel and his sons Dr. Samuel Goldhaber and Dr. Joshua Goldhaber. Although he never pressured his sons to go into medicine, he was very proud that they chose to do so and that both have risen to the heights of their professions at Harvard and University of California, Los Angeles. He was also extremely proud that these two professor sons gave back-to-back presentations at the Brigham and Women’s Hospital Cardiology Grand Rounds.

After joining the U.S. Army he was chosen for its Specialized Training Program for gifted enlistees to go to college during wartime. He graduated from New York University College of Dentistry with a D.D.S. degree in 1948. While in the service and college, he met and married Ethel Renee Gurland, whose father was a dentist. Leaving the Army after active duty during the Korean War as a first lieutenant in the Dental Corps, he completed his undergraduate work at City College of New York while finishing his periodontology specialty training at Columbia University.

He became an HSDM research assistant in 1954, associate in oral pathology in 1956; assistant Professor of oral pathology in 1959, associate professor of periodontology in 1962, and professor of periodontology in 1966. He belonged to many scientific societies, foremost of which was the Institute of Medicine, and was president of the International Association of Dental Research, the highest office in the world of dental research, which was also one of his favorites, as he loved meeting and socializing with academics throughout the world.

With a passion for research and an insatiable curiosity, he worked tirelessly. Believing that research had a “multiplier effect,” he cherished the opportunity to pursue lab work and to encourage others to do the same. Dr. Goldhaber was determined to demonstrate that dentists could and would be recognized as scientists and clinicians on a par with physicians. He often pointed out that dentists were in fact de facto oral physicians and, given that medicine is part of their degree, thought they should consider renaming themselves oral physicians. Paul also recommended that on annual health surveys there be a box asking if you ever had periodontal disease. Moreover, his determination to remain the compleat clinical scientist kept him treating patients until his administrative responsibilities no longer made it possible. Thus, in the largest sense of being a scholar, he truly was a world-class “physician scientist” and teacher.

As one of the longest-serving deans at Harvard University — and the first Jewish Dean — he reinforced the recognition of HSDM as part of the Faculty of Medicine and the University. At one of the first Faculty of Medicine staff meetings held soon after Paul became Dean, the then Dean of HMS, introduced a matter of general interest for the faculty. When the Dean was asked by Paul what role the School of Dental Medicine would play in this area, the dean answered, “I forgot about the School of Dental Medicine.” Paul countered, “Please don’t ever forget the School of Dental Medicine again.” And to his credit, he only rarely did.
Paul improved HSDM in many ways. Not only did he expand its education program with new courses in critical thinking and research methodology and add new and innovative clinical internships in Harvard-affiliated hospitals, but most important, he also increased its endowment, international reputation, and acceptance of women and minorities. Simultaneously, he aggressively pursued funding from the National Institutes of Health, foundations, and other sources, thereby providing new opportunities for faculty and students, such as training grants for advanced graduate study by clinical scholars, He also appreciated the role of the behavioral sciences in the diagnosis, etiology, and managements of dental disease in his research and curriculum development.

With publications and presentations numbering in the hundreds, he was a prolific contributor to science, medicine, and education. As a scientist, he was renowned universally as a leader in the biology of bone destruction. While his research began with questions about the cause of bone loss associated with periodontal disease, he went well beyond that. He was one of the first to champion medical management of periodontal disease and developed improved diagnostic procedures such as the use of nuclear medicine to detect bone activity in sites susceptible to periodontal disease. Throughout the 1960’s he developed a critical and acclaimed experimental system for observing bone resorption in vitro at the cellular level, in relation to the mouse calvarium model. He readily adapted this system to studies of general medical and metabolic problems. His work was published in a seminal paper in the New England Journal of Medicine,“Some current concepts of bone physiology,” in 1962.

As an outstanding researcher and clinician in medicine and dentistry, Dr. Goldhaber recognized the rapid advances in all the biomedical sciences, realizing that dentists as well as physicians could not learn what was needed in four years of professional school. Although medical students continued their training as interns, residents, and fellows, general practice residencies for dentists at that time were the exception rather than the rule. Thus, to assure that HSDM graduates would be properly trained as leaders of the future, he initiated a five-year program. In addition to more clinical training, the extra year provided an opportunity for students to study throughout the world, to complete a more significant mandatory original research project and/or pursue a complementary professional master’s degree from the Harvard School of Public Health, Harvard Kennedy School of Government, or Harvard Graduate School of Education. Although he initially questioned the idea of the double D.M.D./M.D. program for dentists, he soon recognized the reality that specialists such as maxillofacial surgeons would better serve society with both degrees, hence the successful implementation with Harvard Medical School of the combined program.

Perhaps his greatest accomplishment as dean and professor was the number of students who became deans and/or assumed leadership positions at academic institutions around the world. At least a dozen future dental school deans and nearly fifty other notable academicians, clinical scholars, academic health center administrators, and scientists graduated from doctoral or postdoctoral programs associated with HSDM during his time in office. He was incredibly proud of these former students who became leaders in dental medicine, as well as in academic health center administration, as he in turn was grateful to those who had mentored him.

Although Paul Goldhaber held strong views, he welcomed disagreement and received considerable pleasure from debates with worthy opponents. He always spoke his mind and never gave false compliments. On the lighter side, he liked heavy opera, especially “The Pearl Fishers,” and even heavier corned beef sandwiches and half sour pickles. Many years ago, Paul and a colleague were walking on Longwood Avenue. They heard a couple of students talking, unaware of their presence. One of them said to the other, “Don’t worry about the Goldhaber and Epstein exam [at that time those two were the entire department]. They ask the same questions every year.” Paul stopped, confronted the abashed students, and said, “Yes, but the answers are different every year.”

In summary, having been enriched by his keen intellect, devotion to scholarly activities, love for everything about Harvard, as well as his accomplishments in research and education, and most important his friendship, we are all greatly saddened by the loss of one of the giants of the health professions in the twentieth century.