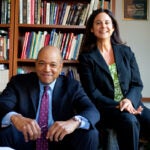 In pursuit of everyday excellence

Growing up in Worcester, Mass., Jason Perez started dealing drugs at age 9. He had two recurrent dreams: that he would go to jail, and that he would die at 21.

Then came Islam, a religion that Perez embraced one day in a sudden street-corner conversion. “At 21,” he said of his old life, “I experienced the death of all my paths.”

Perez — who still favors stiff brim gangster hats and baggy pants — changed his first name to Hamza and brought to Islam what he had: Puerto Rican culture, street savvy, and a knack for hip-hop. His duo M-Team delivers a deep-beat message of faith, mercy, and forgiveness.

Call it “New Muslim Cool.” That’s the name of a documentary film about Perez released earlier this year by producer-director Jennifer Maytorena Taylor. A screening last weekend (Oct. 10) drew a packed crowd of 220 to the auditorium at the Arthur M. Sackler Museum.

It was the first such screening at Harvard, but will be “the first of many” because of the film’s educational value, said Diana L. Eck, director of the Pluralism Project, a screening sponsor.

Ray Williams, director of education at the Harvard Art Museum, another sponsor, said museums have a role in spiritual education, and “New Muslim Cool” fits right into it.

Before the film, viewers took in a special exhibit on the south wall of the Sackler’s gallery of Islamic art. In “Sacred Spaces: The World of Dervishes, Fakirs, and Sufis,” centuries-old drawings and paintings depict Islam’s mystical path. Williams said Perez’s own path resonates with this ancient search for the divine.

“New Muslim Cool” acknowledges America’s post-9/11 suspicions of Islam, and layers in suspicions of what Perez himself represents: Islam, Puerto Rico, the ’hood, and hip-hop.

The film, narrated in Perez’s shameless street idiom, is funny. In one flip-chart seminar, a plea for money to rehabilitate drug dealers, Perez charts the hierarchy of American capitalism. At the top, he said, are pimps and prostitutes.

“New Muslim Cool” includes a nightmare or two. Perez moves to Pittsburgh, where the FBI raids his mosque. He loses his job as a chaplain at a local jail. (He is re-hired.) But one hope keeps breaking through — that Islam is a path to social redemption. “We made a decision,” said Perez, “to save ourselves and our families.”

After the screening, he took questions. How, he was asked, has he coped with the FBI raid and continued surveillance in Pittsburgh? “We don’t mind they watch us,” said Perez, “because God is watching us.”