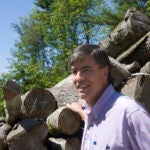 Foster elected to Trustees of Reservations board of directors

Crimson drop their second contest of the year

Sooner or later, the Lafayette Leopards were due for their day in the sun. They finally cast a big shadow on Saturday.

Lafayette, which had dropped the past eight games to the Crimson, had a 2-11 all-time record against Harvard. That changed with its stunning 35-18 win Saturday (Oct. 17) on Cambridge Football Day.

Turnovers and penalties led to self-destruction for Harvard, which lost the ball twice and was penalized seven times for 68 yards in its second loss of the season and its first home defeat in nearly three years.

On the first play of their opening drive, the Crimson fumbled, and Lafayette recovered the ball on the 27-yard line. The turnover was an omen for Harvard, and three plays later the Leopards scored a touchdown to go up 7-0. Lafayette tacked on three more touchdowns in the first half, going into halftime up 28-3. By that time it was clear that, for this day at least, Lafayette was the better team.

“A lot of the credit goes to Lafayette. … I think it was a combination of a very good Lafayette team and less-than-great production on our part,” said head coach Tim Murphy.

The Crimson rallied for 15 points in the fourth quarter to soften the blow, but it wasn’t nearly enough for Harvard, which hadn’t lost to the Leopards since 1996.

Despite the loss, the silver lining for both the Crimson offense and the defense was the way they continued to battle, even though defeat was imminent. “We did a better job in the second half, and there’s definitely things to build on,” said captain Carl Ehrlich ‘10, who recorded three tackles on the afternoon. “I think the biggest takeaway from this is that there’s plenty to improve, there’s plenty to fix before we go down the Ivy League stretch.”

“Bottom line is Lafayette did a better job of playing and coaching today than we did. That’s why they got the victory,” said Murphy. “Penalties are inexcusable. When we win, we win by minimizing mistakes. We have to maximize our opportunities.”

On Saturday (Oct. 24), Princeton, another team that has struggled in the past against Harvard, will seek its third win in the past 15 games against the Crimson. The game will mark the beginning of a new tradition, as Harvard’s first homecoming game in the program’s 135-year history. Kickoff is at noon.