Liem, professor of ichthyology, dies at 74 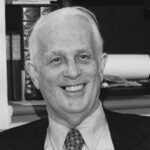 Henry Bryant Bigelow Professor of Ichthyology Karel Frederik Liem, an expert on the functional anatomy, evolution, and physiology of fishes and curator of ichthyology in the Museum of Comparative Zoology (MCZ), died on Sept. 3 at the age of 74. Liem had devoted 37 years of his life to research and to the education of students at Harvard, and he won teaching awards from the University of Illinois and from Harvard. Liem also served as co-master of Dunster House with his wife, Hetty, for 12 years.

Born in 1935 in Jakarta, Indonesia, to a Chinese father and Dutch mother, Liem received a bachelor’s and then a master’s degree from the University of Indonesia, finishing in 1958. He was awarded a Ph. D. by the University of Illinois in 1961. Liem taught at the University of Leiden in Holland and at the University of Illinois, and held a curatorial position at Chicago’s Field Museum. He was recruited in 1972 by the MCZ. For many years Liem co-taught the large introductory evolutionary biology (“Bio 2”) course at Harvard. His lectures were celebrated among students for their depth and eloquence, for the way Liem filled the blackboard with free-flowing multicolored drawings, and, above all, for the humor he traded freely with his students.

Liem leaves behind his wife, Hetty Khouw Liem; a son, Karel F. Liem Jr.; and a daughter, Erika Liem. A memorial gathering is planned at the MCZ later this fall.