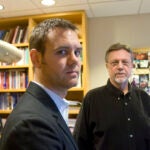 To tell the truth

Every month, Sarah Stewart-Mukhopadhyay fires her 20-foot gun in the basement of Harvard’s Hoffman Lab, sending shivers through the concrete and steel structure that can be picked up by seismometers upstairs.

The gun is far too big to be held by hand. Stainless-steel silver and painted blue, it has a barrel supported by an I-beam leading to a round collision chamber. The target tank’s thick steel door is two feet around and is secured by a dozen bolts, looking like something on a submarine. That seems fitting because the large, head-high blast tank beyond – where the debris and expanding gas wind up – also looks a bit like a sub.

Hearing how Stewart-Mukhopadhyay, the Loeb Associate Professor of the Natural Sciences, fires projectiles at cylinders of ice, one wonders what ice ever did to her. The projectiles hurtle through the air at more than 6,000 miles per hour. They’re more than an inch-and-a-half wide and weigh up to 7 ounces, packing an enormous punch.

But Stewart-Mukhopadhyay isn’t trying to punish ice; she’s trying to change it. The projectiles are fired in the name of science, and it takes a lot of oomph to re-create meteor collisions on the distant moons of the solar system.

Most people think ice is simply ice, but Stewart-Mukhopadhyay knows better. Ice is ice, she says, here on Earth. Beyond this world there are 15 kinds of ice, with crystals arranged in intricate lattices. Those structures are created in the massive collisions of meteors on icy surfaces, such as those occurring on several of Jupiter’s moons. These collisions are what Stewart-Mukhopadhyay studies, seeking evidence of change.

What she learned won her the Urey Prize in Planetary Science this fall from the American Astronomical Society (AAS), awarded “to recognize and encourage outstanding achievements in planetary science by a young scientist.” Her research into other forms of ice has helped to explain curious pits found inside impact craters on Jupiter’s moons, Europa, Callisto, and Ganymede. Like craters on other planets and moons, these enormous depressions were carved out by collisions. But some of the craters have a curious central pit, a feature that has left planetary scientists scratching their heads.

Stewart-Mukhopadhyay believes the answer lies in ice. Because these moons have icy surfaces, she believes that the pits are the signature of a phase change by the ice into one of its unearthly forms. When a meteor plows into a moon’s surface, it blows out an enormous impact crater, sending shock waves through the surrounding material. At one point, the ice undergoes a phase change to a more exotic form, absorbing energy and causing the material to slow down. This creates a void in the surrounding material that, as the energy dissipates and the debris inside the crater settles, forms the central pit.

Ice is common in the solar system. It has been found on Mars by several missions, and is thought to be on almost all objects in the outer solar system, including Jupiter’s moons. The ones she has studied – Europa, Ganymede, and Callisto – are thought to have significant oceans under a thick crust of ice. Even Earth’s moon is thought to harbor ice, with NASA slamming its LCROSS satellite into a lunar crater in hopes of observing water in the debris plume.

To conduct her work, Stewart-Mukhopadhyay models what happens in such collisions, then re-creates them in her basement lab to test her ideas, and then goes back to revise her models. For split seconds, she has created forms of ice on Earth that otherwise exist only under intense pressure beyond this planet. They exist long enough to be measured, but vanish in microseconds.

To get the process rolling, Stewart-Mukhopadhyay has her own walk-in freezer next to the gun room. She and her lab team either make their own ice or buy ice made from distilled water. They shave it and recompress it to form target disks. Slightly larger than the projectile that slams into them, the disks are stacked, forming a multilayer sandwich with thin copper wire in between. By creating a magnetic field around the samples, the impact generates an electric pulse in the wire, which Stewart-Mukhopadhyay measures to understand what is happening to the ice.

A great deal of effort goes into each series of collisions in the Hoffman basement. Each experiment, she said, is a prototype, run once and never again, requiring theoretical and preparatory work from her, her two graduate students, and a lab technician before the experiment is run. Once everything is ready, she said, the experiment is triggered from a control room. The researchers pull the trigger, take measurements, and start on a new prototype.

Stewart-Mukhopadhyay said initially she knew what she wanted to do with her life after taking high school physics. From there it was just a matter of specialization.

The first observed collision between two solar system bodies — the crash of Comet Shoemaker-Levy 9 into Jupiter — happened when she was a Harvard undergraduate in the 1990s. That heightened her interest in the solar system’s roots.

She did her doctoral work, which she completed in 2002, at the California Institute of Technology, home to the only other big gun used for Earth and planetary science experiments.

“Once I started doing lab experiments, I realized there was a lot to do,” Stewart-Mukhopadhyay said. “The collisions that grow things and collisions that destroy planets tell us a lot about the history and evolution of the solar system.”