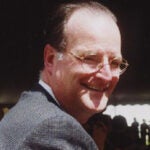 Erin Hafkenschiel, a Harvard Kennedy School student working toward a master’s degree in public policy and urban planning, has been awarded an NSCS-GEICO Graduate School Scholarship of $5,000 from the National Society of Collegiate Scholars (NSCS).

NSCS is the nation’s only interdisciplinary honors organization to invite first- and second-year college students, and it offers members exclusive access to scholarships, career resources, leadership, and networking opportunities.

Hafkenschiel, a native of Sacramento, Calif., became an NSCS member as an undergraduate student at the University of California, Berkeley, where she received her bachelor’s degree in the political economy of industrialized societies.

Hafkenschiel, who plans on using her degree toward creating more sustainable urban development by addressing social and environmental problems in cities, wants to focus on working to help build a new model of urban development for overpopulated cities in China.