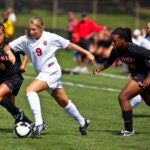 Last week, running back Cheng Ho ’10 was unstoppable, rushing for 132 yards in Harvard’s 28-14 win over Lehigh. This week, it was the running back tandem of Gino Gordon ’11 and Treavor Scales ’13 — who combined for 251 yards and three touchdowns — that guided the Crimson (3-1; 2-0 Ivy League) to their third win of the season.

It was a coming-out party of sorts for both running backs. Through the first three games of the season, Gordon entered the game with just 105 yards rushing on 30 carries. Yet on Saturday, the junior exploded for 137 yards on 22 carries and a touchdown. Scales, who through three games ran for 56 yards, racked up 92 yards on the ground and two touchdowns. The freshman’s breakout performance earned him Ivy Rookie of the Week honors on Monday (Oct. 12).

The defense, which gave up a season-low 10 points, was led by freshman cornerback Brian Owusu, who recorded two key interceptions, and junior safety Collin Zych, who had eight tackles and two passes broken up on the day.

Harvard returns home on Saturday (Oct. 17) to host Lafayette. The Crimson have won the past eight matchups and hold an 11-2 record against the Leopards. Kickoff is set for noon.