From stem cells to functioning strip of heart muscle 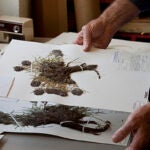 “This moves us closer to heart stem cell therapy.”

A team of Harvard Stem Cell Institute (HSCI) scientists at Massachusetts General Hospital (MGH) and collaborators at Harvard’s School of Engineering and Applied Sciences (SEAS) has taken a giant step toward the possibility of using human stem cells to repair damaged hearts.

“This is the beginning of making heart parts for heart disease,” said Chien, the director of the (MGH) ardiovascular Research Center and the Charles Addison and Elizabeth Ann Sanders Professor of Basic Science at Harvard Medical School (HMS).

The new work by the HSCI-SEAS team, being published in tomorrow’s edition of the journal Science, raises the possibility of someday using induced pluripotent stem cell (iPS) technology to take a skin cell from a patient with heart disease to use in generating muscle tissue to repair the diseased heart – avoiding the need to suppress the immune system and the possibility of rejection, a major issue in organ transplantation.

“This is an initial step in moving beyond heart stem cell biology towards a different level – finding a rare cardiomyogenic cell from embryonic stem cells that can proliferate on its own and could potentially be therapeutic. This work moves us closer to heart stem cell therapy,” Chien explained. “The beauty of the system our team has developed relates to the almost pure population of the exact cells, ventricular heart cells, which we’re trying to replace in a damaged heart, and then expanding and assembling them into a functioning strip of pure ventricular muscle. That has not been done to my knowledge.”

We’ve “been able to take these very rare populations of muscle progenitors that were isolated because we were able to color code the cells,” Chien explained. “We look for the cells that have a mixed color read out. We’ve been able to take those cells and put them one layer thick on something that is almost like Saran Wrap. When they contract, they flex the film. We have the pure cells; they can be expanded, and they can make fully functional strip of muscle.”

The bioengineer explained that the best way to visualize the construction of the muscle strip might be to think of a “Fruit Roll-up,” but with cells taking the place of the pressed fruit.

Chien called the new findings “the latest in a chain of scientific discoveries that have come out of our lab here at Mass General and the Harvard Stem Cell Institute that have been a collaboration of physicians, scientists and bioengineers. For the first time we report the identification of a cell that could be viewed as perhaps an optimal cell type to promote cardiac muscle regeneration because the cells that we use come from embryonic stem cells and then have been induced to form an intact strip of functioning ventricular muscle.” Chien said the work takes the most basic form of undifferentiated stem cell and directs its differentiation and development “to ventricular muscle – and that’s the type of muscle in the heart we’re trying to regenerate.”

“What we think we have right now are the exact cell types to do this type of repair,” said Ibrahim Domian, first author on the Science paper and an HMS instructor in medicine. “One way or another we have to get to three dimensional muscle, which is made up of multiple layers of cells. The amazing thing about these strips we have
now is that they are generating the right amount of force, but as you want to generate more force, you have to increase the thickness of the strips, and they have to have their own blood supply. There are two ways you could do this; rely on tissue engineering to produce a strip like that, or find a way to use the natural architecture of the heart to regenerate the muscle. We’re now working hard in our lab and with Kit Parker, to see how we could produce the thicker strip.”

There are a number of approaches to solving the delivery problem, Chien said. One might be to incorporate the cells into a gel of some kind, which could be applied to the damaged muscle. Another might be to simply inject the cells into the damaged tissue, hoping that they would proliferate and create new muscle. In Chien’s view, novel technology for cell delivery will be required in either case.

Over the past two years Chien and his team have published a series of leap-frogging studies, first making a discovery in mice, then replicating it in human embryonic stem cells; then taking the next step in mice, then moving on to human cells. Next comes the attempt to actually repair cardiac damage in animals and then on to clinical studies in the next five years.

“In mice we’re in a position to attempt the repair right now,” Domian said. “We can cause a heart attack, and then look for ways to repair the tissue. The simplest way is to inject the cells into the tissue – we can do that right now in mice. If that doesn’t work, we have to rely on other technologies.” But, he added, “this is direct proof of concept that a similar approach will work” with human embryonic stem cells.