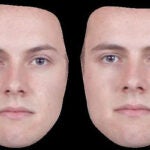 Gay men most attracted to most masculine faces; straight men most drawn to most feminine

Gay men
are most attracted to the most masculine-faced men, while straight men
prefer the most feminine-faced women, according to the results of a new study by a Harvard researcher.

The findings suggest that regardless of sexual orientation, men’s
brains are wired for attraction to sexually dimorphic faces — those
with facial features that are most synonymous with gender.

The research is published online in the journal Archives of Sexual Behavior, and was led by Aaron Glassenberg, while completing his master’s degree in the Department of Psychology
at Harvard. Glassenberg is a doctoral student in organizational
behavior in Harvard’s Faculty of Arts and Sciences and Harvard Business
School. Glassenberg’s co-authors are David Feinberg of McMaster University in Ontario, Benedict Jones and Lisa DeBruine of the University of Aberdeen, and Anthony Little of the University of Stirling, both in Scotland.

The study is the first to examine the facial feature preferences of
gay men and lesbian women. Women’s preferences are more complex than
men’s, as indicated by prior research demonstrating that ovulation,
contraceptive use, self-perceived attractiveness, and sex drive all
affect face preference. In this particular study, straight women
preferred more masculine-faced men than lesbian women, while lesbians
preferred slightly more masculine female faces than straight women or
men.

Participants viewed images of faces that were digitally manipulated
to be more masculine or feminine, and then indicated which face they
considered more attractive. The study was conducted online, and
included more than 900 men and women.

Prior research has also shown that women prefer more masculine male
faces when ovulating, indicating an evolutionary function for facial
attraction. Men who have faces that are higher in sexual dimorphism
(masculinity) have been shown to have better health and dominance but
lower investment in offspring.

Although it is difficult to make substantial evolutionary claims
from this study, Glassenberg’s work supports the idea that male
attraction operates differently from female attraction, regardless of
sexual orientation.

The research project was supported by Harvard University.