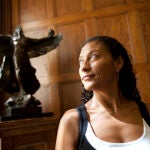 Historian Caroline Elkins, who received a Pulitzer Prize in 2006 for her book “Imperial Reckoning: The Untold Story of Britain’s Gulag in Kenya,” has been named professor of history at Harvard University, effective July 1, 2009.

Elkins was previously Hugo K. Foster Associate Professor of African Studies in Harvard’s Department of History, where she has been a member of the faculty since 2001.

“Professor Elkins is an unusually energetic and resourceful scholar who shows bold imagination in her choice of research topics,” says Stephen Kosslyn, dean of social science in Harvard’s Faculty of Arts and Sciences. “Her ‘Imperial Reckoning’ has realigned historians’ understanding of the final years of colonial Kenya, providing an unparalleled study of the Mau Mau Emergency of the 1950s. She has been a dedicated and exceptional teacher, a very good citizen of Harvard, and a prominent intellectual in the fields of African and empire studies.”

Elkins’ scholarship has touched on modern Africa, the British Empire, and 20th century counterinsurgencies. Her “Imperial Reckoning” (Henry Holt, 2005) unites these three fields, shedding fresh light on the Mau Mau emergency in Kenya from 1952 to 1960, when it was a British colony. In this book Elkins investigates the detention and rehabilitation of the Kikuyu, Kenya’s most populous ethnic group, who were suspected by the British of involvement in the Mau Mau insurrection.

In “Imperial Reckoning,” Elkins reveals new details of Britain’s gulag in Kenya, its perversion of Britain’s supposed “civilizing mission” in its colonies, and Britain’s violation of international human rights conventions during this period. The book reconstructs Britain’s system of detention camps and prisons and the 800 emergency villages created to detain virtually the entire Kikuyu population of more than 1 million people.

Through archival research and extensive interviews with Africans and Britons, Elkins re-creates  the Kikuyu experience during this period, replete with vivid stories of the carnage and destruction of Kenyan lives. She probes the dual nature of Mau Mau, both an anti-colonial uprising and a civil war among the Kikuyu. The book sheds important new light on the end of empires in Africa, along with the complicated nature of decolonization.

In addition to the Pulitzer Prize, “Imperial Reckoning” was a finalist for the 2006 Gelber Prize for Non-Fiction and was named a Best History Book Selection by The Economist and an Editors’ Choice by The New York Times, both in 2005.

Elkins has also edited, with Susan Pedersen, a volume titled “Settler Colonialism in the Twentieth Century” (Routledge, 2005), an examination of the practice of conquering lands so new settlers can reshape their demographics. She is currently at work on the forthcoming “Twilight: The End of the British Empire After the Second World War,” which will investigate British counterinsurgency as its empire declined in Northern Ireland, Palestine, Malaya, Kenya, Southern Rhodesia, and Cyprus. This book will examine the transfer of British military tactics from World War II to late colonial counterinsurgencies, challenging the image of a peaceful dissolution of the British Empire by examining the increase in institutionalized violence in parts of this empire as it neared its end.

Elkins earned an A.B. from Princeton University in 1991, followed by an M.A. in 1996 and Ph.D. in 2001, both from Harvard. She joined Harvard as assistant professor of history in 2001, becoming the Hugo K. Foster Associate Professor in 2005.