Crimson look to helmets in fight against concussions 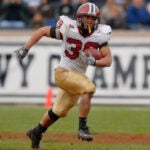 Running away with another victory

When the Harvard Crimson men’s hockey team takes center ice later this month, it will do so with a new line of defense — a tougher hockey helmet designed by Cascade Sports in collaboration with NHL legend Mark Messier. Harvard will be the first Division 1 team to use the helmets.

The Messier Project, spearheaded by the player and his sister, Mary-Kay Messier, hopes to reduce concussions for those who wear the new helmets while bringing more attention to one of the game’s most widespread problems.

“When Mark started coaching and mentoring and saw the same kind of devastating consequences endured by kids, he really was concerned about it,” said Mary-Kay, who is vice president of business development with Cascade Sports and its general manager of hockey.

Need met hope when Mark and Mary-Kay, looking to market their helmet at an NHL equipment show in Phoenix, connected with Harvard equipment manager John O’Donnell, who was looking for a stronger helmet after three Crimson players sustained concussions in the same game.

“It was a concern of mine, equipmentwise, that maybe we should be doing something more,” said O’Donnell. “I was worried about the 30 guys in the room, keeping them in the lineup.”

Although there may never be a concussion-proof helmet, the new model, labeled the M11, has three key features to increase safety. Because 90 percent of the helmet is made from one shell, it provides more protection on impact. In addition, the helmet has a contour system for a better fit, which is crucial to safety. The last but most important feature is the helmet’s Seven Technology, which laterally displaces energy absorbed from a direct impact, allowing the helmet to sustain multiple hits while retaining a constant level of protection.

In tests, the company says, the M11 outperformed standard helmets that use expanded polypropylene (EPP) foam. After the first impact, the M11 performed 26 percent better than helmets using EPP. On the second impact the helmet performed 107 percent better, the tests said, and on the third impact that number rose to 140 percent.

After speaking with the Messiers, O’Donnell determined the helmet was worth the switch. Because Harvard is the first Division I team using the helmets, the school may influence other programs to follow suit as the sport attempts to curtail concussions across all levels — from youth hockey to the NHL.

“You don’t realize the outcome, but down the line … it could change some kid’s life,” said O’Donnell.

The hope is that the helmet, coupled with Harvard’s athletic training program that takes a proactive approach to monitoring concussions, will make a difference.

The training program includes a baseline screening of each student athlete’s cognitive functions before he even gets into action. If an athlete sustains a concussion, the training staff conducts another test and compares the results with the initial screening to determine the severity of the injury and track the athlete’s health.

“The nature of the game is inherent to inducing concussions. There’s nothing we can ever do to change that. Concussions are going to happen,” said Chad Krawiec, assistant athletic trainer for Harvard Athletics. “The biggest thing we do to reduce the incidence and recurrence of it is more on the management side. We’re very astute in terms of trying to recognize the symptoms of concussions and jumping on them right away.”

Even so, he hopes that using the helmets will reduce the number of Crimson icers in his training room.

“It’s a big concern. There’s a lot more concussions than a lot of people realize,” said Crimson head coach Ted Donato ’88, who watched a number of friends and teammates suffer severe concussions while playing at Harvard and in the NHL.

“Are they going to prevent concussions? I’m not sure anything’s going to prevent a concussion,” said Donato. “As a coach, I look at it and say: ‘Some people think that this is the best protective helmet in regards to concussions. Let’s look into it, and if we can make it work, let’s go for it. If we can avoid a concussion … it’s worth it.”