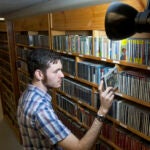 From a clash of worlds, the newest professor

In 1982, Glenda R. Carpio boarded a plane in her native Guatemala and flew to New York City. She was 12 years old. She could not speak a word of English, she had never seen snow, and material wealth was as remote to her as the planet Mars.

“Snow was at least pretty,” said Carpio, who as of July 1 is among Harvard’s newest tenured professors. “English was daunting.” (She teaches both in the Africa and African American Studies Department and in the English and American Literature and Language Department.)

Behind her in 1982 was a country violently chaotic after decades of civil war. A single incident had just left her father dead, murdered on a train. Ahead of her was life with her mother, who worked as a maid for a wealthy Westchester, N.Y., family.

Without fanfare, Carpio found herself in the middle of seventh grade, at a school where poverty was unheard of, where violence was only on television, and where the only foreign-born students had parents who worked for IBM. In front of her eyes for the first time “was the world with all its disparities,” she said of her classmates, whose privilege had narrowed their perspectives. “I saw not only the power of wealth, but also its dark side.”

Five years later, Carpio was a freshman at Vassar College in nearby Poughkeepsie, a city of uneasy racial mixes on the Hudson River. To her great shock, a bubble lay over the sedate old school of Seven Sisters fame. Just outside the gates was a parallel world of urban poverty and violence. With the move from Guatemala, said Carpio, getting from poverty to riches meant “at least there was a plane ride.”

To break out of the bubble after graduation in 1991, Carpio joined Teach for America and moved west. She taught English in public schools in heavily black and Latino Compton, Calif. “There was no sense of hope or progress,” she said of her students in that first year. “It was just a jail for them. They had to do time.”

Carpio — then barely in her 20s — learned how to prepare, to engage, and to bring meaning to lessons. “They taught me to teach,” she said of her first tough audiences — eighth-graders and fourth-graders crushed by shame and poverty. They needed “a sense of play and freedom,” she said, along with expectations of “rigor and discipline.”

Carpio brought that same sense of engagement to Harvard in 2002 after doctoral work at the University of California, Berkeley, and college teaching experience in New York City. “It has served me here,” she said of those hard-won Compton lessons. At Harvard, students are universally well-prepared, said Carpio, but they are hobbled by another kind of shame: the fear of failing.

Her scholarship has arisen in part from a dissertation that explored the cultural meaning of American slavery in late 20th century fiction — work that last year blossomed into her first book, from Oxford University Press, “Laughing Fit to Kill: Black Humor in the Fictions of Slavery.”

The book required Carpio to employ rigorous scholarship not only to the work of established black writers, but to minstrel shows, mammy figures, and the emergent edginess of stand-up comedians like Richard Pryor. “Culture,” she said, “gets made in complicated and messy ways.”