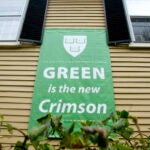 On a bitter October afternoon, a handful of teens set out for the location of their first film shoot, not as the next wave of rising silver-screen stars, but as future behind-the-camera celebrities.

The group is a diverse mix of boys and girls from varied backgrounds. A few are just into their teenage years. Others will soon graduate from high school. But they share a connection to the area and a curiosity about filmmaking.

Moments before, they were at the Honan-Allston Branch Library reviewing some fundamental filmmaking techniques with the help of Austin de Besche, a local director and documentary filmmaker, who explained to them the importance of the wide shot and the closeup.

The students’ task this day was to create a two-minute clip without sound or edits.

“You’ve got to shoot it in the order that you want it to be seen,” said de Besche. “The other thing to think about is what you don’t want to be shown.”

Kat Morgan, a pink-haired, 16-year-old Allston resident with multiple piercings, already had an interest in image making. She used her own still camera to shoot photos en route to the film location, the Harvard Allston Farmers’ Market.

“I figured it would be interesting to take a film course because it shares so many parallels with photography,” she said, after pointing her video camera at a stall of vegetables. “I just filmed something, and I thought it was pretty fun.”

Priscilla Lee, 13, who heard about the project through her Allston church, already has her own underlying artistic directive.

“I like producing stories and conflict,” she said, “and resolving conflict.”

The group is part of the Allston Brighton Arts Bridge initiative developed by a team of recent alumni from the Harvard Graduate School of Education’s (HGSE) Arts in Education Program. Over the course of an 18-session workshop, the program will teach 15 local teens to create short digital documentaries about their communities.

The program’s four founders met while students last year at HGSE. They hail from the fields of film, acting, and music, but all share a passion for developing a community arts organization in an urban environment. As they collaborated on a school project around their common vision, they decided to take their idea from the classroom to the real world.

“We realized that this was something that we were all very passionate about and had a lot of confidence in,” said Arts Bridge co-creator Kim Dawson. “We decided on our own we might take this after school was over and approach Harvard to ask for some kind of funding.”

Members of the group said they chose to work with Allston and Brighton in part because of their diverse natures, and their need for more comprehensive arts opportunities.

Their timing couldn’t have been better. In March they learned of a new Harvard collaboration with the city of Boston and the Allston community, one that could provide funding. The group submitted a proposal, and in June was awarded a $20,000 grant by the Harvard Allston Partnership Fund, which supports neighborhood improvement projects, including cultural and educational programming for Allston and Brighton.

They have also received support for their project from the Office for the Arts at Harvard. Steve Seidel, the Patricia Bauman and John Landrum Bryant Lecturer on Arts in Education, and director of HGSE’s Arts in Education Program, is on their board of directors

The teens meet on Fridays at the branch library to attend lectures and discussions with the Arts Bridge founders, as well as to hear guest speakers involved in film production. Each week the teens also will venture into the community to shoot footage for their individual short documentary films, which they will write, produce, and direct. Later they will edit their work in a lab at Brighton High School. Their films will be unveiled at a public screening in March.

“We are going to be supporting kids in creating their own stories by helping them learn and master the basics of video production, but also really the fundamental thinking behind filmmaking,” said Arts Bridge cofounder Angélica Allende Brisk, who hopes her work will help make the students develop “new ways of thinking.”

In addition to working with local teens, the project is partnering with the Honan-Allston branch and Brighton High and developing partnerships with area businesses and organizations.

At a party for the program at the Cambridge Center for Adult Education last month, John Rule, president of Rule Boston Camera in Brighton, who supplied the group with their technical equipment, said he was thrilled to be part of a project with such a “fantastic vision,” adding, “it’s teaching, training, and education for my future customers.”

The work is a labor of love for the four founders, all of whom devote many hours each week to the project, while working full-time jobs elsewhere. But they are confident that their efforts will pay off. Their long-range plan is to develop a permanent, free arts and learning center in the community.

“In five years we hope to be in our own space, and to be a beacon of light for the neighborhood,” said Arts Bridge co-founder Maura Tighe Gattuso, “a place where all ages can come and learn and explore arts through media.”