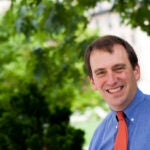 Lipsitch catches the flu in action

Amid calls for transformative change in the world’s energy supply, Harvard chemist Ted Betley is taking a back-to-basics approach and examining the mother of all energy supplies — photosynthesis — for clues to how nature runs a power plant.

Betley, assistant professor of chemistry and chemical biology, says he’s convinced that solar power must become a bigger part of the world’s energy mix. Though he terms “pie in the sky” visions of power plants driven by artificial photosynthesis any time soon, he also insists that critical lessons can be learned by understanding nature’s intimate photosynthetic secrets.

The ultimate goal, he said, is to create simpler, artificial processes that mimic photosynthesis — or at least the reactions that occur within it — and that might prove useful on an industrial scale.

“We ask, ‘Can we at least take some of those simple [natural] design principles and try to make an artificial system that allows us some of those same types of reaction sequences?’” Betley said. “Up to this point, this is something chemists aren’t good at.”

Photosynthesis, of course, is one of the pillars underlying life on Earth. Though some bacteria have been shown to live in the dark off chemicals, the rest of terrestrial life is dependent on plants and microbes that use the sun’s rays to power a chemical reaction that consumes water and carbon dioxide, and that produces the oxygen we breathe and sugars used by plants.

Without photosynthesis, not only would the world be devoid of oxygen-breathing creatures like humans, it would also be devoid of the fossil fuels — dead dinosaurs and rotted prehistoric plants — that are the foundation for today’s energy supply.

To Betley, as he considers the enormously complex molecular manipulations that nature has engineered in photosynthesis, it is the metal that’s the thing.

A metal called manganese, which must be sequestered by plants, plays a key role in photosynthesis. Though it is neither the reaction’s raw material nor its product, manganese is the site of some of the reaction’s critical events. It is on a cluster of charged manganese ions that water is stripped of its oxygen, and it is there that oxygen atoms join to form oxygen molecules that are released into the air.

In a natural photosynthetic reaction, nature uses manganese that is bound up in an enormously complex protein, thousands of atoms long. While scientists know how to create artificial proteins, Betley said such an enormous molecule is difficult to both create and manipulate.

Though Betley describes his work as being in its early stages, he said he and his research team have created a 40-atom molecule that acts as a scaffold for the manganese atoms, precisely positioning them in space. This scaffolding will allow more detailed study of chemical events involving the metals without getting them tangled up in an enormous protein.

“If you talk about how to get oxygen into the biosphere … nature does it utilizing proteins or enzymes. The gatekeepers for doing these reactions are these small metal clusters. Photosynthesis uses a small cluster of four manganese ions to actually execute the chemistry of taking oxygen from water, releasing protons and electrons, and stitching the oxygen together to get oxygen in the atmosphere,” Betley said. “What’s poorly understood is how these clusters function. … Can we distill this huge machinery into its most essential components and see if we can understand what’s going on at least at that gatekeeper? And, after doing that, can we simplify it?”

Betley, who came to Harvard two years ago from a postdoctoral fellowship at the Massachusetts Institute of Technology, revels in lab work. Though his administrative chores compete for his time, he says he still gets joy out of just running reactions and seeing how they turn out. In a way, he said, his work is almost archaic — chemistry at its most basic, involving test tubes filled with solutions that change color when you combine them.

In addition to his work on photosynthesis, Betley and his lab are studying ways to manipulate a central chemical bond, called a carbon-hydrogen bond, in long organic molecules. If successful, the work could have industrial applications in transforming materials like petroleum products into other useful compounds, such as soap. One example Betley offered would allow greater use of methane gas from remote wells. Today that methane could be used as a fuel but is difficult to transport. Manipulating those bonds is key to finding a simple way to transform methane gas into methanol, a liquid, which would allow it to be transported far more easily, he said.

“We’re a lot further along than I have any right to expect at this point,” Betley said. “It’s trying to make something that doesn’t have a lot of innate value and make it very, very valuable. … It’s understanding how you’re doing it and how you can change it, that’s where the true power of chemistry comes in.”