Avant-garde past and present 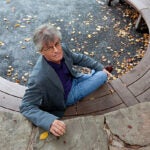 A Fluxus tour with Alison Knowles

In 1960, Alison Knowles was a young artist in beat-era Manhattan. She took long walks up Canal Street, which in those days was lined with “job lots,” barrels of random overproduction from factories. For a dollar or less, you could buy handfuls of set screws, ribbons, glasses frames, and other industrial detritus.

“You didn’t spend any money to make an art object,” said Knowles, a Radcliffe Fellow this fall. “You went along Canal Street and put something together.”

She and her friends were part of Fluxus, an anti-art art group that had begun at the New School for Social Research. (It still exists.) The idea was that chance mattered in expression, and that traditional art had drawn too hard a line between itself and real life.

Fluxus became “a basis for American performance art, such as it is,” Knowles told an Oct. 19 audience at the Radcliffe Gymnasium. (She delivered the 2009-10 Julia S. Phelps Annual Lecture in Art and the Humanities, a Radcliffe tradition.)

Introducing Knowles, Helen Molesworth, curator of contemporary art at the Harvard Art Museum, said Fluxus was “probably the most important art movement you haven’t heard of.”

“Chance has become an underlying principle of our world view,” even in science, Knowles told the audience. Why not apply its randomness, flexibility, and “impartiality toward the result” to expression?

Early on, Knowles abandoned painting and turned to Fluxus. The art there involved “event scores,” scriptlike prompts to improvised action in a public setting. “Make something in the street and give it away,” reads one event score, “Street Piece” from 1962.

An event score is “a simple recipe for action,” said Knowles, and is intended to set off “unpremeditated occurrences.” She recounted a few in her characteristic deadpan, including the pianist who began his concert by opening all the windows, and the violist who smashed his instrument. “It was a very popular piece,” she said. “He had to sign all the fragments.”

The random and the odd ruled along Canal Street too. Knowles showed slide after slide of little artworks, many inspired by the bins of junk: a watch case full of shells and pebbles, a chess set made of screws, one-hole “finger boxes” filled with salt, sugar, pins. “You name it,” said Knowles. “You don’t see what you’re touching until you figure it out by touching.”

Randomness can inspire a lot of wit — commentaries, perhaps, on the modern world that are ironic or oblique. There was her friend’s “gallery in a hat,” the piano rigged inside with cups and spoons, and the Nivea cream party. (“Make a mess,” the directions read.)

Or take “the identical lunch” — artists “performing” the same meal, at the same time, and in the same place every day — and then writing about it. (Yes, you can Web search for “Journal of the Identical Lunch” by Alison Knowles.) If you care to try, it must be a tuna fish sandwich on wheat toast with lettuce and butter (no mayo), with a large glass of buttermilk or a cup of soup.

And Knowles may be the only artist who composed random poems via Fortran, and then dropped reams of poetry printouts from a helicopter.

Beyond the random, there is the plainly odd. Knowles recalled the Canal Street artist who set out, she said, “to cut everything in half.” Knowles showed a slide of a bisected fire alarm knob and a “hat for a half-wit,” a derby sawed down the middle. Knowles also once made a book with pages 8 feet high and 4 feet wide. There was a kitchen, a bathroom, and a tunnel-like bedroom. “I could invite people, literally, into the book,” she said. One friend slept there for three nights.

Knowles, with Canal Street and its material inspirations in mind, paused to praise saran wrap: stretchable, “sonic” (since it can make noise), and ubiquitous. She called it “an amazing material for performance.” (In one Fluxus project, she tucked onion skins into saran wrap, copied the results on blueprint paper, then offered the random shapes to her musician friends as scores. They played for 10 minutes each.)

She likes flax paper, too, especially shaped into leggings and mittens, or filled with beans to make clattering music. (Knowles demonstrated, and said that the larger “bean roll” she used at the Guggenheim Museum made a “deafening” sound.)

“I study beans,” Knowles observed in that deadpan. “I collect beans, and I eat beans.” Food may be the soul of wit. Knowles played a video clip of “Make a Salad” that featured dozens of chefs on a balcony preparing tons of lettuce and tomatoes and vats of dressing — all poured onto a green tarp below. Knowles raked the salad together, then served an audience of hundreds.

Not content with pictures, Knowles brought in the performers, five young women wearing white blouses who took to a temporary stage. They performed “Song of Your Choice” — five songs sung at once — and “Newspaper Music:” a simultaneous reading out loud, with Knowles in front and arms raised, “conducting” the volume levels.

In “Shoes of Your Choice,” first performed in 1963, a little girl got up, set her boots on a music stand, and explained how she bought them.

“These pieces,” said Knowles later, “are some kind of storytelling.”

Art sometimes requires turning away from art. She recalled the heady early days in the 1960s, in New York and in Europe, when dissident artists in Fluxus turned to “real people instead of images.”