A century of everyday learning 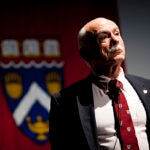 Extension School glances back, forges ahead

It was 1835, and John Lowell Jr., the wealthy young scion of a prominent Boston family, sat by the Nile River in Luxor, a cradle of Egyptian civilization. Sick with fever, he drafted a long revision to his will and mailed it home to a cousin. Months later, Lowell was dead.

That revamped will included a bequest that has rippled ever wider across almost two centuries. Most notably, it led to creation of the Harvard Extension School, which is celebrating its centennial year, with the official anniversary in February.

Lowell’s idea was simple, but brilliant. Everyday people wanted to learn, he thought, and just needed a forum that allowed them to do so. In the 19th century, that method mostly involved public lectures. In the 20th century, it was usually classroom study, and in the 21st, the trend is toward distance learning on the Web.  But what has been true of the Extension School from its earliest incarnation is its devotion to public learning, and its students’ fierce desire to be taught.

Evolving far beyond its origins as a lecture series, the Extension School is now a degree-granting institution with 14,000 students that this year is offering close to 700 undergraduate and graduate courses across 65 fields, taught by faculty from nine of Harvard’s 10 Schools.

The modern Extension School has embraced video learning and podcasts.  One hundred and fifty courses are available online, expanding the School’s reach to students in 122 countries. About 20 percent of its students take courses exclusively online.

Yet it was the forward-thinking Lowell, born in 1799 near the dawn of the American republic, who launched this thriving Harvard institution. Half of his wealth — the princely sum, in those days, of $250,000 — in 1839 established the Lowell Institute, the Extension’s precursor. His bequest is a trust, active to this day, charged with offering public lectures in Boston on the arts, sciences, and natural history, to students regardless of gender, race, or age.

The first Lowell lecture, on geology, was held in 1840, in an era of rising working-class clamor for education. The public’s response was tumultuous, with tickets being distributed amidst near-mob scenes. The institute’s collegiate “courses” — which were lecture series on a single topic — sometimes drew 10,000 applicants.

By 1898, more than 4,400 free lectures and courses had been offered through the Lowell Institute. Around that time, Boston schoolteachers were looking for ways to earn a bachelor’s degree at night. The Lowell lectures and the lobbying teachers created a perfect storm of sorts, and by 1910 University Extension at Harvard was founded.

Another visionary with the Lowell surname created the modern school.  Harvard-educated government scholar A. Lawrence Lowell became trustee of the institute in 1900, and by 1906 was promoting “systematic courses on subjects of liberal education,” as he called them, taught by Harvard faculty.

His vision of transforming a lecture program into a school of public education gained traction in 1909 when he was named president of Harvard. His first step in office was not the curricular reform for which he later became famous. (Among other things, Lowell invented the idea of “concentrations.”) Instead, he pressed to create a University Extension.

His desire, according to Shinagel, who has written a new history of the School called “The Gates Unbarred,” was “to carry out more completely the idea of John Lowell Jr.”

The heart of Extension today is still what the elder Lowell intended nearly 175 years ago: to share higher education with those outside the University gates. (Courses require no admissions exams or residency requirements.) Lowell also wanted the courses to be free for those of little means and inexpensive for others. (The fee for a six-month course, he had stipulated, should equal the price of two bushels of wheat.)

Through the 1950s, most Extension courses cost $5 each (slightly more than two bushels of wheat). Now any Harvard staff member can take a graduate-level course for $40 a semester, making it possible to earn a master’s degree for $400. Regular per-course fees are relatively modest, from $900 to $1,850.

Age is no barrier.  The Extension School has accounted for Harvard’s youngest graduate, at 18, and its two oldest, at 89.

Echoing that excellence, the first Extension School courses in 1910 were offered by the cream of Harvard’s faculty. For instance, Charles Townsend Copeland taught English literature through the 1920s. (At Harvard College, his everyday students became some of the century’s foremost writers, including T.S. Eliot, Robert Benchley, and John Dos Passos.)

John Lowell Jr.’s generosity was matched by his foresight. Lectures had to be open to women as well as men, according to his will. (In the first semester, 400 of 606 Extension students were women.) He also wanted to reach out to the working class. A third of the early students were homemakers, another third were schoolteachers, and most of the rest were clerks, stenographers, and bookkeepers. Their average age, 35, was outside the college norm too.

In 1910, University Extension was part of an area consortium of colleges offering night classes. Harvard, Tufts, Wellesley, and others began awarding associate in arts degrees, equivalent then to a bachelor’s. (By the 1920s, only Harvard still had an extension program.)

In 1913, the first two graduates completed an associate in arts. John Coulson’s degree read “Harvard University” and Ellen Marie Greany’s “Radcliffe College.” By 1975, there were still only 1,000 Extension graduates. Today, following a flurry of recent degree and certificate programs — and a tuition assistance program for Harvard staff — there have been more than 13,000 Extension graduates.

Extension offered courses on radio in 1949, and on television in 1957. By 1960, Harvard was using television kinescopes to bring college courses to U.S. Navy submarine crews, and later to the surface fleet.

By 1985, Extension introduced its first computer-based distance learning course in what was known then as “teleteaching.” By 1997, distance education at Harvard moved to streaming video and audio, and in 2005 podcasts were added to the mix. Last year, one of Extension’s online courses netted 385 registrants.

In 2004, Extension started an A.L.M. program in biotechnology to attract local research scientists working in academic and industry laboratories. It is the only program of its kind in Massachusetts to offer evening study, and it includes emerging specialties like bioinformatics, bioengineering, and nanotechnologies.

“The biotechnology program appeared late on the timeline for Harvard Extension School’s first 100 years,” said Director Cheryl D. Vaughan, a lecturer in Harvard’s Department of Molecular and Cellular Biology. “But it is well situated to make a distinctive mark on its second.”

Early on, Harvard faculty and administrators recognized the discipline and maturity of Extension students. “At the stroke of eight every lecture evening,” one observer wrote of a 1910 philosophy class, “notebooks were spread and until nine o’clock not a glance wandered. …”

From the beginning, Extension students reflected a decidedly modern diversity. The same 1910 observer noted that “young and old, black and white, artisans and teachers, men and women — who had questioned the meaning of life, and the universe, were eager to compare their thoughts with the questioners of all time.”

Today’s students include restless executives, soldiers in Iraq, grandmothers, former dropouts, and at least one retired railroad engineer. Seventy-five percent of them have at least a bachelor’s degree.

Rosario Del Nero, a Boston research-and-development chef, is finishing an A.L.M. in Spanish language and literature. Cevin Soling, a New York City documentary filmmaker (“The War on Kids”), moved to Cambridge last year and is exploring a degree in philosophy.

“Each and every one in that classroom wants to be there,” said Harvard anthropologist William L. Fash Jr., who has taught Extension courses for 10 years. “The students dig deep.” Fash is the Charles P. Bowditch Professor of Central American and Mexican Archaeology and Ethnology.

“Extension students invest in the course work,” said the Rev. Peter J. Gomes, Plummer Professor of Christian Morals and Pusey Minister in the Memorial Church, who has taught several Extension courses. “They think it is as important as you do.”

“I have special affection for the Extension School,” said American studies legend Sacvan Bercovitch, Harvard’s Powell M. Cabot Research Professor of American Literature. “That’s how I made my way.” (He is a 1961 graduate of Sir George Williams College in Quebec, an extension school.)

“I understand some of your problems,” he told his literature seminar on the first night of class this fall, “and it’s a pleasure to be teaching.”

The “problems” of Extension students often involve the merciless physics of time. Many hold down full-time jobs, have limited money, or are parents of younger children.

If you count going to school, La Keisha Landrum, who is working toward an A.L.M. in journalism, has four jobs. She is an associate in the Cambridge mayor’s office, a part-time nanny, and three times a week works overnight at Harvard’s parking lots. Landrum grew up near Los Angeles and moved east last year after losing her job in real estate development, drawn to Cambridge and Harvard by an earlier visit. “So what do I love?” mused Landrum, as she rethought her life’s path. “I decided I loved journalism.”

Derek Asaff, an aspiring screenwriter and former sketch comedian, works for a technical coating company. He takes as many as four courses at a time toward his A.L.B. degree. Twelve years ago he dropped out of Cornell University — “School just wasn’t for me” — and swung back into academics after losing an earlier job.

“It offers everything you’d want,” he said of Extension. “It’s bargain-basement prices, and it’s amazing education.” Asaff’s dream is a doctorate and a writing job — on comics, comedy, the movies. To get there, he bears down hard at school. “I’m nerdy about it.”

Shirley S., a onetime high school English teacher who has a master’s from the Harvard Graduate School of Education, has a doctorate in mind too. She started course work at Extension last year while looking for a job, taking two literature courses last fall, and intensive French this semester. “I wanted to do something I loved.”

It’s the diversity of Extension that still amazes her, now working at the W.E.B. Du Bois Institute for African and African American Research. The School, she said, “opens its doors to all kinds of people.”

“Much has changed in the 10 decades” since Extension’s founding, Harvard President Drew Faust said last month, yet “Extension remains rooted in its original principles. We still honor [President] Lowell’s vision of Harvard’s own responsibility to extend the University’s intellectual benefits beyond the confines of its walls and to recognize its interconnectedness with its surrounding community, and with the world.”

What’s in a name

Degrees from what is now Harvard Extension School evolved … by degrees.

In 1910, University Extension offered the associate in arts degree,
equivalent then to a bachelor’s degree.

In 1933, many institutions (junior colleges) were granting an “associate in arts” degree for only two years of work. In response to that, and to assure that Harvard’s degree was not cheapened, the Faculty of Arts and Sciences voted to change the title of the Extension’s bachelor’s degree to “adjunct in arts.”

In 1960, the adjunct in arts was replaced by the bachelor of arts in extension studies degree (A.B. in Extension, or A.B.E.). The A.B.E. was still equivalent to a four-year college program, and was conceived specifically for adult students.

In 1971, an associate in arts in extension studies degree (A.A.) was established. It represented the equivalent of two years of full-time study.

In 1979, a master’s degree in liberal arts (A.L.M.) was established, and the A.B.E. became the bachelor of liberal arts in extension studies (A.L.B.).