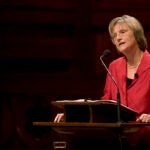 Despite conceding the game’s first goal in the 12th minute, the Crimson overcame the early deficit with two first-half goals from Christina Hagner ’10 and Melanie Baskind ’12, going into the half up 2-1.

Starting the second half, Penn committed a costly foul that would eventually seal their fate. Junior forward Katherine Sheeleigh drew a foul in the penalty box for the Crimson,  and Lizzy Nichols ’10 converted on the eventual game winner in the 52nd minute.

The Quakers tried to rally late, cutting the deficit to 1 at the 69:04 mark, but it wasn’t enough as the Crimson secured their second win of the season and their first win in the past five games.

No strangers to slow starts, last year Harvard started the season 3-3-3, before going undefeated in the final eight games of the season to finish with a 10-3-4 (5-1-1 Ivy League) record.