Visiting faculty bring their art along 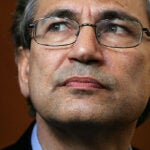 After college, All-Ivy squash player Carlin Wing ’02 moved to Holland and played for two years on the professional circuit.

Today she looks like she could still slam a 125 mph kill shot. But Wing instead makes a living as an artist. Art and athletics share a lot, she said. Practitioners are looked at, they entertain, and they inhabit a world of fervent economic activity.

They are being celebrated on the ground floor of the Carpenter Center with “Visiting Faculty 2009-10,” an exhibit of paintings, photographs, installations, and avant-garde video.

Most of the working artists will be on campus for just one semester to help students use paint and pixels to explore the far borders of creation.

And most will deliver Carpenter Center public lectures, starting Sept. 24 with the Berlin-based Tottie. Her “Written Language” is a display of large-scale ink drawings in the exhibit. In them, she said, “mistakes and deviations form an unexpected image.”

In late August, Wing helped install her portion of the show: 11 photos, large and small, and one looping art video (about squash). The video fills the gleaming-floored, high-windowed gallery space with the popping and squeaking sounds of match play.

“I hope to grab people visually so they come forward and then
engage with the ideas,’’ Wing said of her work, whose layers invite successive meanings. “There’s a lot more to it if you stick around. An artist always hopes people stick around longer.”

Stick around, for instance, to watch the creations of David Lobser, a New York City animator. His effulgent, surreal, and witty work carries a hint of Tim Burton and David Lynch (both inspirations).

Lobser’s computer-animated worlds are inventive and cleverly scored. They are layered with joy and danger and the one life condition that combines them both: sex.

“Video,” he said of his art form, “was my first love, before high school even.”

“Arcade” is a 4-minute film made in 2000 that Lobser said helped him figure out what kinds of films he wanted to make. “Elephant Girl” (2007) pursued some of the same themes. The two films share bright outer worlds that devolve to inner worlds rife with danger, mystery, secrets, and death.

By comparison, “The Hunt” (2007) is set to a sparkling fragment of Mozart and “feels like a doodle,” said Lobser. It’s only 45 seconds long, and unfolds as lightly as the pig-shape clouds that float around in it. “I wanted to express an emotion,” he said, “without investing the time in making a longer, more intense piece.”

“Mother’s Day” (2008) is a 2-minute animation that reprises the biting, eating, and eroticism of Lobser’s earlier films — but in a lighthearted way. A caterpillar turns into a cocoon, then into a flying bug that emerges into a world of botanical enticement: snapping plants with jagged teeth and tentacles, all with some kind of come-on. The plant that finally eats the bug is a pretty-faced, motherlike plant with double rows of succulent teats. Thanks to this mother though, here is life after death. With a fartlike heave, she excretes more caterpillars.

Zalopany, who lives in Manhattan’s fabled Chelsea Hotel, is a painter whose exhibit watercolors re-imagine photographs of native women in 19th century Hawaii (where her father was born). How were racial differences depicted — what was hidden and what assumed?

“They’re not the pretty hula girls,” she said of the subjects on display in her three paintings: solemn native girls with broad, dark faces. “These paintings are based on photos — the earliest from 1860.”

Zalopany — a student, lately, of racial depictions — has painted from photos of all-black police lineups and of 1950s-era Japanese women who were pearl divers. “I have always been interested,” she said, “in ‘The Other.’”

Of her penetrating, realistic paintings, Zalopany added,  “I want people to look at the work and start asking questions.”

Sarah Jane Lapp, a Seattle animator and filmmaker whose work is widely available online, will get you thinking, too. Recline in front of the exhibit video screen showing “Chronicles of a Professional Eulogist” (2009), slip on the headphones, and glide into her magical world of jiggling, bright-painted animation, archival photos, and sonorously wise voiceover.

“I could live in my own drawings,” said Lapp recently in a whimsical artist’s statement. “They are tidier than my own studio.”

Then comes her artist’s view of the practicality of a life surrendered to observation and interpretation: “Drawing,” wrote Lapp, “engenders and documents discovery.”

Wing remembers visiting-faculty shows at the Carpenter Center from her undergraduate days at Harvard. And she remembers the visiting faculty themselves, and how valuable it was to have both artist and art in one place.