Strong effort by Crimson not enough 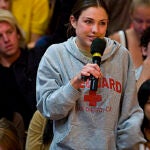 Sharing ‘Justice’ with the world

UConn, which trailed Harvard 19-22 in the fourth set, finished with a 6-1 run to extend the match. From then on the Crimson never really regained their momentum and the Huskies took the fifth set by a score of 15-13.

This year, the team looks to improve on last year’s 10-16 (5-9 Ivy League) record, and it appears as though Harvard has the personnel to do it.

The trio of Comrie, Docter, and Ingersoll has been the backbone of the Crimson’s offense so far this season, accounting for 70 percent of the team’s kills.

The freshman Docter has been spectacular, tallying 18 kills in the Crimson’s season opener against Colgate and receiving Ivy Rookie of the Week honors on Tuesday. With four games under her belt, the newcomer is already tied for the team lead in kills in addition to leading the team in service aces.

“She’s very composed on the court and she’s got a great sense of the game,” said head coach Jen Weiss, who is entering her 16th season for the Crimson. “She’s a well trained-volleyball player.”

Although Harvard has now dropped its last two games and will spend the next six  on the road against tough nonconference opponents, the real challenge will be to improve on last season’s five conference wins.

“We’re hoping to figure out how this match is going to help us prepare for the Ivies,” said Weiss.

This weekend (Sep. 11-12) the Crimson travel to Rice University for the Mizuno Invitational II, where the Crimson will face Wichita State on Friday (Sept. 11) before taking on Rice and South Carolina on Saturday (Sept. 12).