Sharing ‘Justice’ with the world 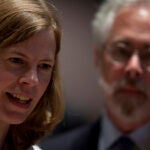 Harvard University has teamed up with WGBH Boston to produce a new television series and interactive Web site that will take viewers inside one of the University’s most popular courses. “Justice” will premiere on public television stations nationwide in mid-September.

“Justice,” taught by Michael Sandel, the Anne T. and Robert M. Bass Professor of Government, will consist of 12, one-hour episodes and is based on the popular political philosophy course held in Harvard’s Sanders Theatre. The series will give viewers the opportunity to join in discussion and grapple with difficult ethical questions posed by the professor and students during each session.

The “Justice” interactive companion Web site, JusticeHarvard.org, will host discussions and debates with participants from around the world. It will provide free access to all the episodes in the series, along with discussion guides, quiz questions, readings, and discussion boards that will enable participants to share their “Justice” experience with other viewers.

“This is an exciting opportunity to use new technology to open the classroom experience to the world,” said Sandel. “‘Justice’ takes up some of the biggest and most difficult questions we face as citizens — equality and inequality, the role of government and markets, the place of morality in politics. We’re hoping to engage viewers of all ages in a lively experiment in civic dialogue.”

WGBH executive producer Brigid Sullivan adds, “Michael Sandel is an insightful, entertaining, and accessible teacher. We wanted to give the viewer at home the feeling of taking a front row seat in Michael’s classroom. We hope the series will help inform people how to engage and participate in public discourse and expose them to some of the great thinkers of the past. The philosophers that are featured in Michael’s course and in the series give our audience the chance to understand what is going on today through historical perspectives and lessons.”

“This innovative project is an opportunity to share some of the outstanding scholarship taking place on our campus with a significantly broader audience,” said Steven E. Hyman, provost of Harvard University. “I expect that Professor Sandel will captivate the WGBH audience as he has the thousands of Harvard students who have enrolled in his courses over the years.”

Each “Justice” episode will include a beginner and advanced companion discussion guide for use in private discussion groups and school classrooms, and by individuals. Every lecture also will feature a thought-provoking polling question. Viewers will be able to cast their votes and see how their moral reasoning compares with others.

Over the years, Sandel’s “Justice” class has been taken by more than 14,000 students. Its popularity is due in part to Sandel himself, who engages students in discussion on topics that include affirmative action, income distribution, and same-sex marriage. He attempts to show that even the most hotly contested issues of the day can be the subject of reasoned moral argument.

About Michael Sandel
Michael Sandel has been teaching political philosophy at Harvard since 1980. He has published six books on topics including democracy, liberalism, bioethics, and morality in politics. His writings have been translated into 10 foreign languages, and also have appeared in The Atlantic, The New Republic, and The New York Times. Sandel received his doctorate from Oxford University, where he was a Rhodes Scholar. This month, Farrar, Straus, and Giroux will publish Sandel’s latest book, “Justice: What’s the Right Thing to Do?”

About Harvard University
Harvard University is the oldest institution of higher learning in the United States. Since its founding 16 years after the arrival of the Pilgrims, the University has grown from nine students to more than 20,000 degree candidates within Harvard College and 11 graduate and professional Schools. Its generous financial aid programs make the University accessible to all students from around the world. Harvard has educated eight U.S. presidents, more than 20 Supreme Court justices, and leaders in fields including academia, law, medicine and health, technology, religion, engineering, literature, business, arts, finance, journalism, and human services.

About WGBH
WGBH Boston is America’s pre-eminent public broadcaster, producing such celebrated national PBS series as “Masterpiece,” “Antiques Roadshow,” “Frontline,” “Nova,” “American Experience,” “Arthur,” and “Curious George,” and more than a dozen other award-winning primetime, lifestyle, and children’s series. For its efforts, WGBH has been recognized with hundreds of honors, including Oscars, Emmys, Peabodys, and duPont-Columbia Journalism Awards. Visit WGBH on the Web at WGBH.org.