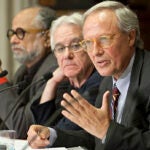 To his professional friends, Kentucky-born J. Max Bond Jr. was a “civic architect” — one who believed that buildings should reflect the needs of the people who use them, and should express social and cultural realities.

Bond, who died in February, is being honored this fall with both an exhibit and a retrospective panel at the Graduate School of Design (GSD).

“Practice, Education, and Activism” — a colorful timeline of photos and architectural models — is on display at Gund Hall through Oct. 18. The panel discussion, “Max Bond, Multiculturalism and Social Equity in the Built Environment,” is open to the public and takes place from 3:30 to 5 p.m. tomorrow (Oct. 2) at Gund Hall’s Piper Auditorium.

“He carved the path for so many in our profession, and his determination, wisdom, and guidance will continue to inspire all who knew him,” said GSD Dean Mohsen Mostafavi, the Alexander and Victoria Wiley Professor of Design. “Today, the School is committed to building on that legacy of cultural diversity.”

Between degrees, Bond worked briefly for Paul Williams in Los Angeles — the “architect to the stars” and a prominent black practitioner. Williams’ first job for the Harvard graduate: Design a tile floor in a house for Frank Sinatra.

Bond (who practiced and taught in New York City) maintained his Harvard connections — both as a mentor to GSD students of color, and as part of the School’s Visiting Committee from 1993 to 2002. During the 2007-08 academic year, he was also on the practitioner’s advisory board at Harvard Design Magazine.

Bond’s presence was also felt at Harvard in more concrete terms. The Harvard Institutes of Medicine building he designed for Harvard Medical School was finished in 1997. And in 2003 he designed the expansion and renovation of the Harvard Club of New York. A photo of the renovation — grand, light-filled, and dramatic — appears in the Gund Hall exhibit.

Bond’s passion for social justice had many sources, including the periodic stings he felt at Harvard College, where at least one professor discouraged him from studying architecture — and where a cross was once burned in front of his dormitory.

Bond also inherited such passions from his upbringing. His father, J. Max Bond Sr., was dean of education at Tuskegee Institute, where the school’s architectural features — including an airplane hangar for the famed Tuskegee airmen — first inspired Bond to design buildings.

His father was also a co-founder of the University of Liberia. From 1963 to 1967, the young Bond — by then married and a father — lived in Ghana, where he practiced architecture. “Professionally, I grew up there,” he once told an interviewer.

In 1968, he began a 16-year teaching career at Columbia University, and a year later opened the doors of Bond Ryder Associates — which by 1990 was Davis Brody Bond, and later Davis Brody Bond Aedas. In 1985, Bond started a long academic association with City College of New York.

Through the years, Bond’s productivity as an architect reflected the diversity he celebrated in life. He designed a library in Ghana, a civil rights museum in Birmingham, Ala., a university in Zimbabwe, and a dance theater in Chicago.

One of his signature buildings, finished in 1981, was the Martin Luther King Jr. Center for Nonviolent Social Change, a sweeping, grand meditative space in Atlanta.

For more on Bond-related activities at GSD, go to http://www.gsd.harvard.edu/events/lectures/.