Opposites attract – but they may not stay together 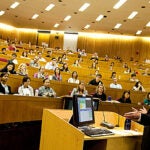 Results of experiment challenge one of 'givens' in physics

Opposites may always attract. But they may not remain together long-term.

In a counter-intuitive discovery published in the current edition of the journal Nature, researchers from Harvard, the University of California at Davis, Princeton, and Penn State University report that oppositely charged drops of water will not attract permanently, but instead will bounce off each other indefinitely when subjected to a force of attraction created by what physicists call an electric field that is too strong.

When William Ristenpart designed the experiment while a postdoctoral fellow at Harvard, he never expected to see what he saw. (Ristenpart is now an assistant professor at the University of California at Davis.)

Knowledgeable of the work of his predecessors in the 19th century, Ristenpart, knew very well that opposite electrical charges attract each other. “It´s what´s expected,” says the chemical engineer then in former-professor Howard Stone’s laboratory at Harvard.

When he set up his experiment – a glass cylinder with the bottom half filled with water, the top half with oil, and wires sticking through each liquid as electrodes – he cranked up the voltage and an explosion followed. But it wasn’t the Bang! that startled him.

What caught his attention was what happened next.

“Imagine a bridge of liquid in the shape of a cone emerging from the water at the interface between water and oil until the cone´s tip reached the top electrode of the cylinder,” he says. “As soon as you have a bridge connecting the two electrodes at a very high voltage, a tremendous current  flows through,” Ristenpart explains.

The sparks of the explosion create a big cloud of bubbles and dozens of water droplets. “I turned the voltage down a bit and I kept watching. The conical-shaped bridge retracted, but the bubbles floated to the top of the cylinder and the droplets, still carrying charge, were now bouncing back and forth from the top electrode to the water-oil interface,” he says.

Terribly confused, never having seen anything like that before, Ristenpart couldn´t understand why opposite charged droplets were failing to merge.

The researcher showed his results to a colleague, Andrew Belmonte, who was on sabbatical from Penn State. James C. “Jacy” Bird, a graduate student in the Stone lab, realized that a similar phenomenon he observed with water drops in air was related and joined the team. “They got interested, and we did a bunch of experiments,” Ristenpart says.

“Basically, one thinks when two drops of water come together they will merge. Intuition tells us that,” Bird, coauthor of the report, says. “And one way to get them to attract and merge even faster is to put opposite electrical charges on them — one with a negative charge and one with a positive charge,” Bird adds.

“The surprising thing that we saw was that if you have two oppositely charged drops in a sufficiently strong electric field, they don´t coalesce, but actually repel and start bouncing off each other,” Ristenpart says.

An electric field creates a “force of attraction” between two charged entities driving their motion towards each other. Increasing the strength of the field should hasten that motion. “It’s what happens when you have a single nine-volt battery versus two nine-volt batteries. The two nine-volt batteries will put more energy into the system so that charges will move toward each other more quickly,” Ristenpart says. But in this case, that´s not what happened. “We spent the next few years studying that accident in detail,” he adds.

What started as a side project led to an explanation of when and why opposite electrical charges do not attract ‘long-term’ — a process that, Ristenpart says, “appears to be a fairly robust phenomenon.”

“One of the first things we did was to figure out if this was reproducible,” Ristenpart says. His team tested different combinations of fluids. “We looked at vinegar and oil, colloidal suspensions, mineral oil and alcohol, air and water, and even crude oil and water,” he says, “and we saw bouncing happening in every system that we tested.”

Ristenpart and colleagues witnessed the phenomenon of non-merging at scales ranging from tens of microns — about a tenth the width of a human hair — up to several millimeters, but their explanation for its underlying physics didn´t depend on the overall size of the drops.

High-speed video revealed that above a certain value the force of attraction produced a double cone bridge (like two cones with their tips touching) between two oppositely charged drops of water.

“The drops themselves remain stationary; what moves is the interface between them. It deforms, forming the double cone,” Ristenpart explains. The long and narrow structure of the “bridge” between the drops was preventing them from merging. “Water molecules are trying to squeeze together. It´s like having thirty students stand on top of a very narrow desk hanging on to each other tighter and tighter so they don´t fall off, exerting pressure on each other,” Ristenpart says, “It´s what drives them to move away, back to their respective drops instead of merging.”

The counter-intuitive phenomenon has applications in the study of cloud formation, microfluidics — where fluid motion is controlled at very small scales to study chemical reactions — and the petroleum industry where strong electric fields are used to extract the crude.

It´s still possible that merging can occur in less viscous systems where oppositely charged drops are already moving so quickly towards each other that the presence of a force driving them apart fails to overcome their motion.

“There is a bunch of other velocities and scales where other forces might be more important. We just haven´t investigated yet.”