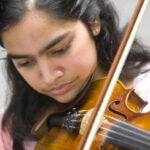 The sound of music

The Charles Eliot Norton Lectures, a tradition at Harvard since 1926 and missed in only eight of those years, enjoy their 55th iteration beginning this month, with a Sept. 22 talk by Turkish novelist Orhan Pamuk, the winner of the 2006 Nobel Prize for literature.

Pamuk, born in 1952, is a celebrant of his native land and the author most recently of “The Museum of Innocence” (2008). He is the 2009-10 Charles Eliot Norton Professor of Poetry at Harvard, a lectureship established in 1925 to advance the understanding of “poetry in the broadest sense.”

The post has been held by a Who’s Who of luminaries in art, poetry, and music, including T.S. Eliot, Robert Frost, Igor Stravinsky, Lionel Trilling, and Leonard Bernstein, who delivered his lectures punctuated by illustrations on a piano.

Pamuk will deliver six free public talks, in a series called “The Naïve and the Sentimental Novelist.” They are the first Norton Lectures to explicitly address the novel as a literary form.

The Norton Lectures are traditionally published by Harvard University Press (though Frost’s and a few others never were). Pamuk’s lectures may appear in book form by 2011.

What happens to us as we read novels? Pamuk will only reveal that on Sept. 22, when he opens the series with a look at that question.

But he has already told us what happens to novelists when they try to write novels, an activity that Pamuk in his Nobel acceptance speech said required “patience, obstinancy, and joy.”

Writing novels, he said, depends on “the crucial task of sitting down at the table and patiently turning inwards. To write is to turn this inward gaze into words.”

Patience trumps inspiration for writers, according to Pamuk, who in Stockholm likened writing novels to an old Turkish saying: “to dig a well with a needle.”

To be sure, the “angel of inspiration” makes visits, Pamuk added, but inspiration always “favors the hopeful and the confident.”

Writing is made of “stories, images, and dreams,” he said in the same speech, but discontent is also required — that “basic trait that turns a person into a writer.”

As a young man, Pamuk’s discontent was with Turkey, which gave him “the sense of being marooned in the provinces.” The same discontent was felt by his businessman father, who periodically escaped to Paris and elsewhere to write and experience culture.

His father “read novels to escape his life and flee to the West,” said Pamuk, “just as I would do later.”

But in later life, for the younger Pamuk, came turnabout. Now Istanbul is “for me the center of the world,” he said — “its streets, its bridges, its people, its dogs, its houses, its mosques, its fountains, its strange heroes … this world I had made with my own hands.”

That small world contains “the collective humiliations, vulnerabilities, slights, [and] grievances” of the larger world, Pamuk said, and it prompts a realization “that the great majority of people on this earth live with these same feelings.”

Maybe that is what happens to us as we read novels: We see ourselves, in others.

“All true literature rises from this childish, hopeful certainty, “ said Pamuk, “that all people resemble each other.”