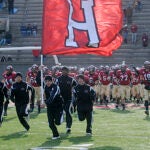 Poised to make it three

Lloyd M. Aiello, a Harvard Medical School (HMS) clinical professor of ophthalmology at Joslin Diabetes Center’s Beetham Eye Institute, will receive the 2008-09 Warren Alpert Foundation Prize on Sept. 29. The day’s celebration will feature a talk at a symposium, beginning at 2 p.m. at Joslin Diabetes Center. As an Alpert Prize recipient, Aiello joins an elite group of physician-scientists and researchers, seven of whom have also won the Nobel Prize.

Aiello will receive this $200,000 award for pioneering treatments he developed for a complication of diabetes in which weak, leaky blood vessels proliferate in the retina, leading to hemorrhage and vision loss.

Today, the vast majority of patients with this disease (diabetic retinopathy) retain their vision thanks to a treatment Aiello and his father-in-law, William P. Beetham, pioneered in 1967.