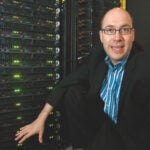 Two Harvard faculty members who study present and past ice sheets
and the science behind familiar objects and everyday events have been
named recipients of prestigious MacArthur Foundation “genius” grants.

This year’s awards, announced today by the John D. and
Catherine T. MacArthur Foundation, go to Assistant Professor of Earth
and Planetary Sciences Peter Huybers and Lola England de Valpine Professor of Applied Mathematics Lakshminarayanan Mahadevan in Harvard’s School of Engineering and Applied Sciences and a faculty member of the Wyss Institute for Biologically Inspired Engineering.

The two were among fellowship recipients nationwide who were
selected from a variety of fields for work exhibiting outstanding
creativity and promise. Each fellow receives a no-strings-attached
grant of $500,000 to encourage their work. Fellows are nominated
anonymously by leaders in various fields and are unaware they are being
considered until they receive a phone call out of the blue informing
them they won.

The award is an investment in the fellows’ future, not a reward for
past accomplishment, according to the foundation. The grant is intended
to free MacArthur Fellows to pursue “their own creative instincts for
the benefit of human society.”

How does that work?

Just over a week ago, the foundation had to be persistent to reach Mahadevan,
who said he received several messages that, because he was teaching, he
didn’t return. When a foundation representative finally reached him, he
asked whether Mahadevan was sitting down and whether he was holding a
baby. He sat, assured the caller he did not have a baby in his arms,
and then heard the news.

“It’s unbelievable,” Mahadevan said. “It’s very nice to be
recognized. It’s incredible that the foundation is showing tremendous
trust in me.”

Mahadevan said he hasn’t made plans for the award yet, though he has
thoughts of doing something to improve education around the world.
Mahadevan said he has always been motivated by curiosity about the
things around him and how they work. While he feels lucky to have had
the opportunities he has, others, perhaps with greater potential, are
not as lucky, he said.

Over the years, Mahadevan has plumbed all sorts of familiar objects
and events for the physics that drives them. He is sometimes asked
whether what he does is useful and he responds that his work satisfies
a need to know and appreciate the world around him, much like a reader
appreciates a novel or a listener appreciates music.

“To be human is to be curious. … Why not encourage that?” Mahadevan
said. “When you tell me you like Keats, that you like Beethoven, I take
it at face value. It’s the same [thing] when you learn something you
didn’t know.”

Mahadevan, who specializes in applied mathematics, macroscopic
physics, and biological dynamics, came to Harvard in 2003 from the
University of Cambridge. He received his bachelor’s degree at the
Indian Institute of Technology, master’s degrees from the University of
Texas and Stanford University, and a doctorate from Stanford, in 1995.
He was assistant and then associate professor at the Massachusetts
Institute of Technology, and was Schlumberger Professor of Complex
Physical Systems at the University of Cambridge.

Taking a multifaceted look at climate change, Huybers
studies the history of Earth’s glaciers and ice sheets, as well as the
temperature fluctuations seen across the planet’s surface over the
course of a typical year. He has also participated in efforts to
reconstruct Earth’s past climate based on the relatively little
evidence available to us.

The MacArthur grant came as a complete surprise to Huybers, who
reports experiencing a combination of “happiness for the honor of
receiving this award, gratitude to the MacArthur Foundation and
colleagues whose recommendations made this possible, and the more
sobering sentiment of wanting to make good on this opportunity.”

Huybers’ research seeks to clarify the as-yet poorly understood
processes that have driven the waxing and waning of Earth’s stores of
ice over the past 3 million years. During the planet’s ice ages, ice
has covered much of the northern continents; today’s relatively
ice-free conditions represent something closer to a historic minimum.

The cause of this periodic melting and reforming of glaciers and ice
sheets remains unclear, with scientists generally unable to agree on a
single compelling theory for these wide shifts in glaciation. Huybers
is working on multiple fronts to gather data and develop tests that might help solve this
mystery.

Huybers also studies the tremendous annual temperature variations
seen across much of the Earth’s surface. Earlier this year, his
analysis of global temperatures between 1850 and 2007 shed new light on
this question, showing that winter temperatures have risen more rapidly
than summer temperatures. Among other effects, this imbalance has led
spring to arrive, on average, nearly two days earlier than
just 50 years ago, with implications for everything from the budding
of trees to bird migration to the annual dissolution of sea ice.

“I imagine [the MacArthur award] will help in my work, research, and
teaching — all of which are closely connected — in two ways. First, I
would like to use some portion of it to directly support novel climate
research, something that would not usually be funded.

“The second use is more personal,” he says. “My wife, Downing Lu, is
a military physician who has been assigned to take over the pediatric
intensive care unit at Walter Reed [Army Medical Center] in Washington,
D.C., and some portion of this award will go toward making it possible
for me, Downing, and our 2-year-old son to spend more time together.”

Huybers became an assistant professor in Harvard’s Department of
Earth and Planetary Sciences in 2007, following postdoctoral work at
both Harvard and the Woods Hole Oceanographic Institute. He received
his B.S. in physics from the U.S. Military Academy in 1996 and his
Ph.D. in climate physics and chemistry from the Massachusetts Institute
of Technology in 2004.