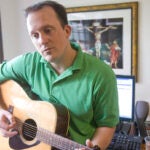 Making music and keeping the faith

Shelly Lowe remembers the shock of her freshman year at the University of Arizona. Raised on a Navajo reservation, Lowe was living away from home for the first time.

Today, years later, Lowe describes the experience as culture shock. The difference in her and her classmates’ attitudes toward money, manners, and even automobiles led her to feel isolated and longing for home.

What Lowe didn’t realize, though, was that there were ways to navigate the cultural transition that Native American students feel when they attend college at mainstream institutions. There were resources that she didn’t know existed.

“The resources were there, but I wasn’t trying to find them,” Lowe said.

Lowe survived the year, despite failing calculus. She switched from majoring in math to sociology and began to try to understand better what students like her go through when they enter college.

Today, Lowe is completing research in that area as part of her doctoral degree from the University of Arizona. In July, she took over as the new executive director of the Harvard University Native American Program (HUNAP) and wants to help Harvard’s Native American students navigate that transition better than she did.

“I knew as an undergrad that I wanted to run a Native student program somewhere,” Lowe said.

Lowe comes to Harvard from Yale University, where she ran a similar program for the past two years.

As she settles into her new role at Harvard, Lowe said the immediate objective for HUNAP will be to complete its five-year review, during which it will set goals for the coming years. The process will entail speaking with faculty, students, and alumni.

In addition to the review, Lowe said HUNAP will still offer two courses in nation building through the John F. Kennedy School of Government as well as continue its support of graduate students studying Native American issues and its regular seminars, community dinners, powwow, and larger events, such as campuswide symposiums.

Lowe said Harvard is well-known in Indian Country through alumni the recruitment of Native American students, and the many programs it has offered since the 1970s.

“Most people know somebody who went to Harvard,” Lowe said. “Harvard has been very good about getting to Indian Country, getting to know Indian communities.”

Harvard’s Indian roots go back to its founding, when it was dedicated to the education of both English and Indian youth. A summer school class, “Archaeology of Harvard Yard,” helped to better understand those roots, with students digging in Harvard Yard near the foundations of what was once Harvard’s Indian College, constructed in 1655. Students uncovered numerous 18th and 19th century ceramic fragments and oyster shells.

Course instructor Diana Loren, associate curator at the Peabody Museum of Archaeology and Ethnology, said she was struck by the number of fine pieces of crockery and oyster shells.

“We’re noticing how nice it was at Harvard,” Loren said. “The amount of oyster shells is significant because oysters were fine dining.”

Loren said that rather than having the holes dug this summer refilled, they will stay open, providing a head start for Harvard College students who take the class this fall. She’s hoping the fall students will be able to get to lower layers, into the 17th century, when the University was founded.

Lowe’s own doctoral research, into resource usage by modern-day Indian students, was quite revealing, she said. The work highlights how few services those students use, even though they’re among a population that typically has great needs. Lowe only has to look back to her own undergraduate years, when she was among those who did not have money for anything beyond the essentials, to understand the situation.

“It was kind of an eye-opener to organizations,” Lowe said of her research results. “Here’s a population that needs services to persist. Somebody has to tell [the organizations offering help] that these students aren’t coming in to see you. There’s always a need to reach out to Native students.”

At Harvard, she said, the situation is a bit different, because the smaller communities formed by the residential House system make it less likely a student will fall through the cracks. Still, she said, her main goal is to ensure Native students thrive and complete their studies at the University.