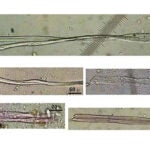 Oldest-known fibers to be used by humans discovered

As a film publicist based in Munich, Lothar Just for decades had a hand in promoting a vast majority of films exhibited in Germany. Behind the scenes, he was equally dedicated to the art of cinema. Along with his wife, Eva, Just quietly spent decades collecting film stills and other publicity materials, eventually compiling a collection of nearly 1 million images, which the couple recently made available to the Harvard Film Archive (HFA).

“These stills are important documents of their particular film, and their particular period, and will be of tremendous use for undergrads looking for images, not only to illustrate papers, but also to learn more about the production process and about otherwise unobtainable films. And of course, these will be very useful for professors looking for images to create slides for class,” said HFA Director Haden Guest. “This is material that would be very difficult to obtain elsewhere. There are certainly materials in this collection that are unique to the U.S., and only available at Harvard.”

For scholars, Guest said, the stills — dubbed the Lothar and Eva Just Film Stills Collection — offer a visual resource that’s virtually unmatched among American universities. In addition to insight into the production of certain films, the stills function as important period artifacts, which document distinct periods of various national cinemas and world cinema in general.

“Quite often, the stills are from films that no longer exist,” Guest said. “In addition, there are often images that summarize certain aspects of a film in a way that might be lost in viewing the film itself, such as providing images of scenes later removed through censorship or some other means.”

Just began collecting stills and other promotional materials in the late 1950s and early 1960s as source material for an annual film lexicon, which he continues to publish. Covering virtually every period of cinema, the collection includes material from the silent era through the past 30 years, though its greatest strength lies in publicity and production stills from the classical studio era of the 1930s through the 1960s. Particularly strong in the area of German cinema, the collection features important holdings on post-World War II German cinema, as well as significant prewar and Nazi-era materials. In addition, the Just collection contains significant holdings in American and European cinema, as well as the work of internationally known Chinese, Japanese, and Latin American film-makers.

While Just’s profession afforded him unique access to much of the promotional material in the collection, the couple also actively collected and sought out certain hard-to-find materials, Guest said.

“The collection essentially includes material from nearly every film that was screened in Germany, even if it didn’t have a wide release, or only played within one of the many German film festivals” Guest said. “Stills for most major and many minor titles that were released from the ’60s through today found their way to Just. Equally impressive, however, are the incredible stills which Lothar and Eva doggedly searched for, including all the material from the ’30s and ’40s, and the Nazi-era material.”

Despite its massive size, Guest said, the collection is highly organized — with the images sorted alphabetically by director or performer — making the process of cataloging the images easier, though still daunting.

Images from the collection will be added to the Film Archive’s catalog as they are processed and cataloged. The full collection will eventually be accessible through the Fine Arts Library, Guest said.

“It’s an incredibly rich collection,” Guest said of the images. “There are already several film still collections within HCL, and with the addition of this new material, the various film stills collections complement each other. We now have a great image resource for film study here.”