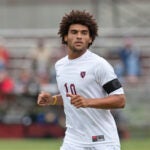 Crimson quarterback Collier Winters ’11 threw for 195 yards and two touchdowns in his first-career start Saturday (Sept. 19) against No. 23 Holy Cross, but the Harvard football team was unable to overcome a 20-7 third quarter deficit, falling to the Crusaders (3-0), 27-20.

Winters, who finished the day with 11 carries and 40 yards rushing, took the Crimson (0-1) 79 yards on the game’s opening drive with a 5-yard touchdown pass to junior running back Gino Gordon to give Harvard the early lead.

But Holy Cross responded big with 20 unanswered points on the way to their third win of the season.

Harvard wide receiver Chris Lorditch ’11, who finished second on the team with 31 receptions a year ago, had a breakout performance with nine balls caught on Saturday to go along with 89 yards receiving.

The Crimson rushing attack was led by Gordon, who had 61 yards and a touchdown on 16 carries to go along with 26 yards receiving and his opening drive touchdown reception.

Down by a touchdown late in the fourth quarter, Harvard made one last push to tie the game at 27, but a Winters’ fumble with less than two minutes to play sealed the win for Holy Cross.

The loss is just the Crimson’s second loss this decade in a season opener, and their second loss to Holy Cross in the past 12 games. Harvard leads the all-time series record, 38-22-2.

This Friday (Sept. 25), the Crimson will try to avenge their only loss last season when Harvard takes on the Brown Bears in the team’s home opener under the lights of Harvard Stadium. Last year Brown defeated Harvard — which finished the season 9-1 — by a score of 24-22. Kickoff is set for 7 p.m.