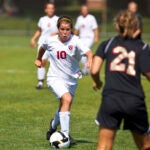 For the second time this season, goalkeeper Austin Harms ’12 of the Harvard men’s soccer team has been named the Ivy League Player of the Week.

The Crimson keeper, who was also named Ivy Player of the Week on Sept. 14, has three shutouts so far this season, and this past week recorded three saves in Harvard’s 1-0 win over New Hampshire (Sept. 23) and three saves in their 1-0 loss to No. 3 Wake Forest (Sept. 26).

Although the No. 6 Crimson fell to Wake Forest, Harms kept Harvard close with his play in the net, and is much of the reason for the Crimson’s 6-1 start, having recorded 22 saves so far this year.

Harms and the Crimson travel to New Haven, Conn., Saturday (Oct. 3) to open up league play against Yale.