Poised to make it three 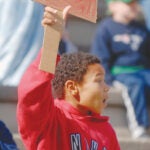 No one has won three consecutive Ivy League Championships since Dartmouth in 1992, but the Crimson are poised to do just that.

Harvard, voted the Ivy favorite for the third time in four seasons at the annual Ivy football media day, will open the season on Saturday (Sept. 19) at Holy Cross. The Crimson are aiming for their third-straight Ivy League championship and 14th All-Time.

Despite being voted the preseason favorite, the Crimson will need to fill a few critical holes created by a number of senior departures. Ivy Player of the Year quarterback Chris Pizzotti ’09, All-American and All-Ivy League cornerback Andrew Berry ’09, and last year’s captain, first-team All-Ivy defensive tackle Matt Curtis ’09, were all essential to the success of last year’s team.

“Anytime you lose as many great players like we lost last year, [including] the Ivy League Player of the Year, it takes some time to fill that void,” said head coach Tim Murphy, who enters his 16th season coaching the Crimson. “Quite frankly, we’re not there yet. We certainly believe we will be, but we have a long way to go.”

Senior captain Carl Ehrlich ’10, who was named All-Ivy Honorable Mention last season, will be the Crimson’s anchor on defense, which returns five starters this season.

“Carl Ehrlich has done a great job. Obviously when the players elect the captain, you expect to get a good leader in every way. Carl was a great leader all summer, and he’s been an inspiration in practices. It starts with him.”

An experienced and talented secondary will be the defense’s strength, led by 2008 Ivy Rookie of the Year Matthew Hanson ’12 at cornerback and safety Collin Zych ’11, who finished second on the team in tackles last season.

Returning on special teams are kicker Patrick Long ’10, who was a 2008 All-Ivy Honorable Mention selection and second in the conference in field goal percentage, and punter Thomas Hull ’10, who averaged 35.2 yards per punt last season.

On the offensive side of this ball, Harvard returns eight starters, including preseason All-American offensive tackle James Williams ’10, and is both strong and deep at the wide receiver and running back positions.

Gino Gordon ’11 and Cheng Ho ’10 will share time in the backfield for the Crimson, with the junior receiving the bulk of the carries. Gordon ran the ball well last year rushing for 578 yards, fourth in the league, and was a second-team All-Ivy selection.

At wide receiver, Harvard returns its top five pass catchers. Senior Matt Luft, a 2008 first-team All-Ivy League selection who was second in the Ivy League with 875 receiving yards and fifth in receptions with 53 last season, will be the team’s top option at receiver in front of a number of capable and veteran wideouts.

The graduation of Pizzotti — who finished second in career passing yards, touchdowns, completions, and attempts at Harvard — is the biggest concern for the team. The Crimson hope Collier Winters ’11 will be the answer at quarterback, as the most experienced quarterback on the team. He saw action in six games as a freshman and recorded two rushing touchdowns, but missed the entire 2008 season with an injury.

“Collier has done a really good job. He’s a very bright kid. He’s a tough kid and he’s [developing] nicely,” said Murphy about the Claremore, Okla., native. “We have the same expectations of him as a Harvard quarterback as we’ve had of others.”

Although he is confident Collier can get it done behind center as the Crimson stand as the Ivy League’s team to beat, Murphy’s philosophy is to take it one game, one moment at a time.