Transition from egg-laying to live-born 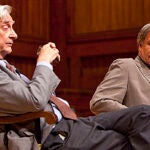 A new analysis of extinct sea creatures suggests that the transition from egg-laying to live-born young opened up evolutionary pathways that allowed these ancient species to adapt to and thrive in open oceans.

The evolutionary sleuthing is described this week (Sept. 16) in the journal Nature by scientists at Harvard University and the University of Reading who also report that the evolution of live-born young depended crucially on the advent of genes — rather than incubation temperature — as the primary determinant of offspring sex.

Having drawn this link in three lineages of extinct marine reptiles — mosasaurs, sauropterygians, and ichthyosaurs — the scientists say that genetic, or chromosomal, sex determination may have played a surprisingly strong role in adaptive radiations and the colonization of the world’s oceans by a diverse array of species.

“Determining sex with genetic mechanisms allowed marine reptiles to give live birth, in the water, as opposed to laying eggs on a nesting beach,” says Chris Organ, a research fellow in Harvard’s Department of Organismic and Evolutionary Biology. “This freed these species from the need to move and nest on land. As a consequence, extreme physi-cal adaptations evolved in each group, such as the fluked tails, dorsal fins, and the winglike limbs of ichthyosaurs.”

Mosasaurs, sauropterygians, and ichthyosaurs invaded the Mesozoic seas between 251 million and 100 million years ago. All three groups of extinct marine reptiles breathed air, but evolved other adaptations to life in the open ocean, such as fin-shaped limbs, streamlined bodies, and changes in bone structure. Some evolved into enormous predators, such as porpoiselike ichthyosaurs that grew to more than 20 meters in length. Ichthyosaurs, and possibly mosasaurs, even evolved tail-first birth, an adaptation that helps modern whales and porpoises avoid drowning during birth.

“Losing the requirement of dry land during the life cycle of ichthyosaurs and other marine reptiles freed them to lead a completely aquatic existence, a shift that seems advantageous in light of the diversification that followed,” says Daniel E. Janes, a research associate in Harvard’s Department of Organismic and Evolutionary Biology.

Even though populations of most animals have males and females, the way sex is determined in offspring varies. Some animals rely primarily on sex chromosomes, as in humans where two X chromosomes make a female and an X and a Y chromosome make a male. Among living marine species, whales, porpoises, manatees, and sea snakes have chromosomal sex determination.

In sea turtles and saltwater crocodiles, on the other hand, the sex of offspring is generally determined by the temperature at which eggs incubate.  These species are also bound to a semiterrestrial existence because their gas-exchanging hard-shelled eggs must be deposited on land.

“No one has clearly understood how sex determination has co-evolved with live birth and egg laying,” Organ says.

Organ, Janes, and colleagues show that evolution of live birth in a species depends on the prior evolution of genetic sex determination. Because the fossilized remains of preg-nant mosasaurs, sauropterygians, and ichthyosaurs show that these species gave birth to live young, they must also have employed genetic sex determination, a point on which the fossil record is silent.

Organ and Janes’ co-authors on the Nature paper are Andrew Meade and Mark Pagel of the University of Reading. Their work was funded by Harvard’s Department of Organismic and Evolutionary Biology and Museum of Comparative Zoology and by the National Institutes of Health.