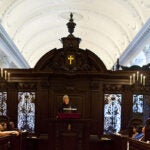 In what organizers hope will be an annual tradition at the University, an official convocation for the Class of 2013 was held in Harvard’s Tercentenary Theatre on Tuesday (Sept. 1). Replacing the standard opening exercises was a ceremony full of pomp and circumstance.

At the onset of the afternoon’s activities, Harvard alumni greeted freshmen and bestowed upon them a small pin with Harvard’s veritas shield, reviving a University tradition that dates back to the 1900s. The alumni then led the students in a procession from the Old Yard into the shaded square of grass between the Memorial Church and Widener Library.

The revamped service, which is described as a bookend to Commencement, was both a reaction to the revised academic calendar and to students’ wishes. While the new schedule gave University officials the opportunity to reorganize the event, they were also responding to a survey about the proceedings in which “freshmen told us that they wanted more pomp and circumstance and [that they] welcomed ritual,” said Harvard College’s Dean of Freshmen Thomas A. Dingman, who was the convocation’s master of ceremonies.

In addition to a welcome from Harvard’s president and Lincoln Professor of History, Drew Faust, the ceremony included remarks from Evelynn M. Hammonds, Barbara Gutmann Rosenkrantz Professor of the History of Science and of African and African American Studies and dean of Harvard College; and Michael D. Smith, John H. Finley Jr. Professor of Engineering and Applied Sciences and dean of the Faculty of Arts and Sciences. The event included music from the Kuumba Singers, the Harvard Glee Club, the Radcliffe Choral Society and the Harvard-Radcliffe Collegium Musicum, as well as an invocation by the Rev. Peter J. Gomes, the Plummer Professor of Christian Morals and Pusey Minister in the Memorial Church. The freshmen were also serenaded by the Harvard Band, which performed “Fanfare for the Class of 2013,” an original composition written for the event by band member Hannah Horowitz ’11.

Students were visibly impressed with the service as they laughed with classmates and gave high-fives to the members of the Crimson Key Society, who lined the route to Tercentenary Theatre and shouted, “Welcome to Harvard!”

“This is like, on a grand scale. I mean, 1,600 people all seated together about to listen to the president; it’s kind of a little bit overwhelming,” said Matthews dorm resident Opeyemi Alabi ’13, from Westchester, N.Y.

Also in attendance were representatives from student groups, various student and academic leaders, and staff, all of whom play an important role for students in their first year at Harvard.

“Our goal is to welcome the class and let them know how excited we are that they are here; what it means to be a part of this community; some of what our history is and some of our traditions, but also some of what this class can do to contribute to the future of Harvard and how they have a role in shaping this community,” said Katie Steele, director for freshman programming, who spearheaded the planning effort for the new convocation. “We also want to show them, with all of the people we have invited: These are the people who are here for you this year.”

Faust, dressed in her ceremonial black robe, welcomed the young crowd and encouraged the group of high achievers to do something they had likely never done before: Fail.

“We already know that when it comes to succeeding, you are all experts. You have been achieving things all your lives at a rather terrifying pace, so much so that your idea of failure is probably well beyond most people’s wildest dreams of success.”

But Faust said the next four years would redefine their meaning of success and life. Recalling her own opening convocation at Bryn Mawr in 1968, Faust remembered the words of her college president Katharine McBride, who told her class, “The path to learning is humility.”

She meant, said Faust, that “learning was about becoming a different and more vulnerable self, a self that could be open to the vast universe of what we didn’t know, of trying things that we did not yet know how to do, and that that would free us.”

Harvard will support you and encourage you to explore new things and experience the unknown, said Faust.

“Our job is to help make this willingness for risk and invention become second nature to you,” she continued, “so that your idea of success can include some failure; so that you allow yourselves to become uncomfortable as you try new things. This is the most important message that I can convey to you as you begin your time here, because it bears not just on how you define success the next four years, but on what it means to be successful at living.”