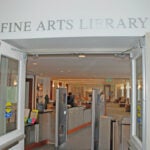 In 1956, a giant green monster swallowed a little library in Boston’s Chinatown neighborhood. Today, a group of Harvard students is helping to bring that library back to life.

Since the spring, the team of graduate students at Harvard’s Graduate School of Design (GSD) has been working on the Chinatown Storefront Library Project, a temporary library installation for one of the area’s vacant, commercial, street-level properties. The project will transform the empty storefront into a local library for three months, briefly re-creating what was razed to make way for the city’s elevated highway and its massive, green girders.

The Chinatown library space is an example of an unseen or underused corner of the urban environment — just the kind of space Marrikka Trotter, M.Des.S. ’09, likes to “reinforce and extend … taking advantage of what is already there.”

She initially worked with the Boston architecture firm Miller Dyer Spears on a feasibility study for a new Chinatown library. But just when the study wrapped up, said Trotter, “the global economic picture had started to darken,” and the idea was shelved.

Undaunted, she decided to look for other ways to move the library concept forward. Working with the nonprofit group Boston Street Lab, which produces temporary urban installations in downtown Boston, she and the group developed the plan for a temporary installation in Chinatown. In 2007, Trotter brought the idea with her to the GSD. Early this year she enlisted the help of her peers.

As part of the Department of Micro-Urbanism, an art and design initiative founded by Trotter while at the GSD, about a dozen graduate student volunteers designed the installation this past spring. In intense brainstorming sessions after class and on Saturdays, the group assembled in a large room, drafted ideas on paper, and then discussed the pros and cons of each design. They ultimately settled on three designs, which they presented at a Chinatown community meeting in April.

To the students’ surprise, the community liked all three.

“We tried to pull the strengths out of each of the three schemes together,” said GSD student Matthew Swaidan of the final design: multiple floor-to-ceiling pods that resemble giant milk bottles and include stackable chairs, desk spaces for computers, bookshelves, and various work surfaces.

Swaidan, M.Arch ’12, and Julian Bushman-Copp, M.Arch ’12, were awarded 10-week paid summer internships through the GSD’s Community Service Fellowship Program, which allowed them to continue their work on the project.

The GSD’s Student Forum and Social Change and Activism student group also provided funding for materials and other costs.

Amid the scream of mechanical saws and a fine filter of dust, Swaidan and Bushman-Copp labored in the School’s basement woodshop on a steamy August afternoon. With help from Patt, they created the outlines for the library pods on a computer, which controlled a giant router that then cut the twisting shapes from medium-density fiberboard. Next, they smoothed down the joints and edges of the large “puzzle” pieces with smaller, handheld woodworking tools, then fit the structure together and secured it with industrial-strength glue.

“This kind of a design/build project is very important at this School because a lot of the studio classes are geared toward the theoretical,” said Bushman-Copp” during a brief break from the work. “It’s important to balance it with projects that become realized and have a very real and immediate effect on the community.”

The installation will be on display in the foyer of GSD’s Gund Hall from Sept. 14 until Oct. 1, when it will move to the Chinatown location for three months. Organizers hope to move the installation to another temporary home once its initial three-month stay is up, and they hope that their work will help demonstrate the need for a permanent library in the community.

“This is about working together with a community that has a specific need, and collaboratively looking for creative solutions,” said Trotter. “That is a deep learning and education experience for everybody involved: the students, the administrators, the faculty, the community members themselves. Everybody benefits, everybody learns.”