Around the Schools: School of Engineering and Applied Sciences 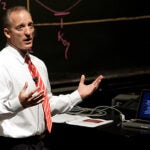 On Sept. 8, President Drew Faust and FAS Dean Mike Smith held a formal reception to welcome Cherry A. Murray, who officially began her post as dean of Harvard’s School of Engineering and Applied Sciences (SEAS) on July 1.

Faust praised Murray’s record of exceptional leadership and her willingness to “face a challenge,” referring to her decision to study applied physics at MIT after receiving a dare from her older brother.

To highlight Murray’s “hands-on approach” to solving problems, Smith offered another anecdote — and safety lesson. As a young researcher, Murray used sticky tape to hold a laser mirror in place. Once activated, the powerful laser melted the tape, causing the mirror to drop and the laser beam to freely slice through equipment and burn a hole in a window. Murray, thankfully, remained unscathed and went on to become one of the leaders in light scattering.

Describing her new home, Murray said, “We are small, but think big and accomplish big things,” and listed recent endeavors at SEAS such as the development of robotic bees, the deployment of a citywide sensor net, and the revival of the Harvard Water Program. “We do some really cool stuff!” she added, laughing.