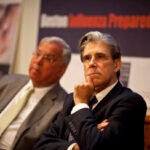 A form of partial
epilepsy associated with auditory and other sensory hallucinations has been
linked to the disruption of brain development during early childhood, according
to a study led by researchers at Beth Israel Deaconess Medical Center (BIDMC).

Described in
today’s advance online edition of Nature
Medicine, these new findings provide the first genetic link between
childhood brain development and a seizure disorder that lasts throughout
adulthood, and also identify a new pathway that controls how neuron circuits
are “pruned” and matured.

“During early
childhood – roughly between the ages of 1 and 5 – the brain undergoes a period
of major circuit remodeling,” explains senior author Matthew Anderson,
assistant professor of pathology at Harvard Medical School and a principal
investigator in the Departments of Neurology and Pathology at BIDMC. “Our
discovery that a familial form of temporal lobe epilepsy can develop at this
point demonstrates the fragility of the brain during this critical period.”

The new findings
focus on the development of synapses, the connections between brain cells.

“At birth, the brain is loaded with
excitatory synapses which help make nerve cells ‘fire,’” explains
Anderson.  “However, if these excess synapses are not adequately ‘pruned,’
they can overgrow, leading to excessive transmission of excitatory signals and
the development of pathological conditions, including learning
disabilities and autism in addition to epilepsy.

Using a
genetically engineered mouse model created in his laboratory, together with
brain slice patch-clamp electrophysiology techniques, Anderson and his
scientific team found that a mutant form of the LGI1 (leucine-rich
glioma-inactivated 1) gene was preventing the normal brain development.

“The first clue
was our discovery that LGI1 is not expressed until the exact time when
excitatory synapses are matured,” said Anderson. “We subsequently learned that
the mLGI1 gene was indeed prohibiting excitatory synapses from being adequately
pruned, leading to an increased excitability of circuits in the brain which
left it prone to excessive synchronous discharges that are characteristic of
epilepsy.”

Autosomal dominant lateral temporal lobe epilepsy (ADLTE) is characterized by
frequent partial seizures (two to five per month) that are associated with
auditory or other sensory auras. Tonic-clonic seizures also occur in the
majority of ADLTE patients, but are infrequent, developing only about once a
year.

“These
partial seizures can have a significant impact on a patient’s quality of life,”
Anderson said. “Because patients can be disoriented and excessively tired
following a seizure event, their day-to-day lives can sometimes be seriously
disrupted. And when it comes to driving and other activities, there is still a
real danger associated with this condition.

“One important reason to identify genetic causes of epilepsy is the hope that
these discoveries will eventually lead to new therapies,” he added. “By
identifying this pathway, we may have found a new target for future drug
development.”

This study was supported in part by grants from the U.S. National Institute of
Neurological Disorders and Stroke, the Nancy Lurie Marks Family Foundation, and
Autism Speaks/US National Alliance for Autism Research.